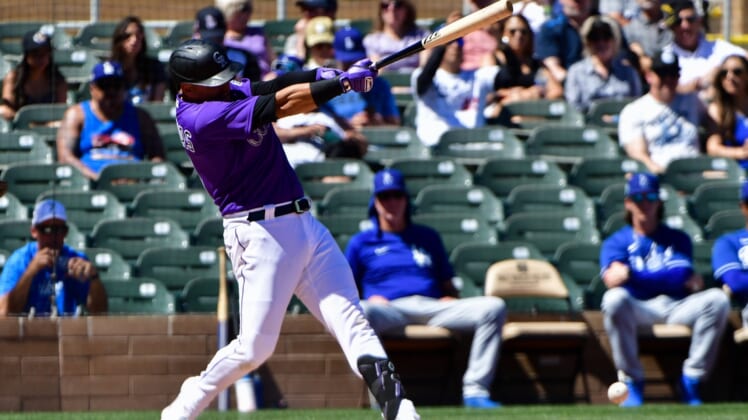 Carlos Rodon made his San Francisco Giants debut against the team that traded him, striking out four batters in a 9-6 spring training victory over the Chicago White Sox on Friday at Phoenix.

The Giants shot ahead with a four-run fourth inning powered by dingers from Thairo Estrada and Alex Blandino. The White Sox drew within three runs with Jake Burger’s two-run home run in the bottom of the ninth, but that was the closest they could get.

D.J. Peterson and Ezequiel Tovar hit back-to-back home runs with two outs in the bottom of the ninth to allow Colorado to tie Los Angeles at Scottsdale, Ariz. The Dodgers led 6-1 through six innings after new acquisition Freddie Freeman drove in the first run of the game and A.J. Pollock, Edwin Rios and Eddy Alvarez added homers.

Vinnie Pasquantino hit a pinch-hit, walk-off RBI single to deliver Kansas City past Cincinnati at Surprise, Ariz. Bobby Witt Jr. went 2-for-3 with three RBIs and two runs scored to power the Royals, who remained unbeaten (5-0-1) in the Cactus League.

Taylor Ward hit the go-ahead solo home run in the bottom of the seventh inning, Ward’s second homer of the spring, as Los Angeles defeated Chicago at Tempe, Ariz. Chicago’s James Triantos tied the game in the top half of the inning with his second hit of the day, an RBI single, before Ward responded.

Texas rallied from a 3-1 deficit with three runs in the sixth inning to defeat Oakland at Mesa, Ariz. Pinch runner Bubba Thompson scored on a fielding error for the Rangers before Nick Solak belted the go-ahead, two-run home run.

Billy Hamilton’s two-run double to deep left in the eighth inning made the difference as Seattle topped Cleveland. Mariners starter Logan Gilbert had six strikeouts, one hit and one earned run across three innings of work.

Mickey Moniak’s game-tying solo home run for Philadelphia proved to be the final run scored in a tie with Pittsburgh at Bradenton, Fla. The game was called early due to rain.

Tim Beckham, a journeyman former No. 1 overall draft pick on a minor league contract, blasted a solo shot for Minnesota in a rout of Tampa Bay at Fort Myers, Fla. Twins starter Bailey Ober allowed one hit and no runs in three innings, fanning four.

Detroit scored all five of its runs in the sixth inning to beat New York in a rain-shortened game at Lakeland, Fla. Jaimer Candelario homered to left center for the Tigers to kick off the scoring run. Eric Haase drove in two runs with a deep double before scoring on a passed ball, and Jack Lopez added a solo homer.

Arizona racked up 14 hits and poured on four insurance runs in the top of the ninth inning in a blowout win over Milwaukee. Brewers starter Brandon Woodruff was shelled for six hits and four earned runs over three innings.