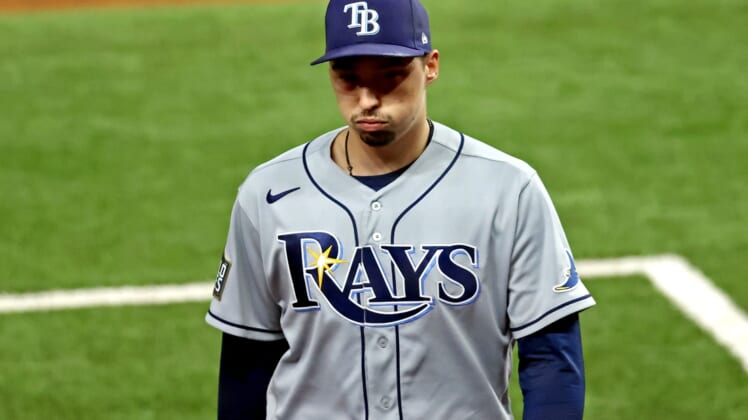 The 28-year-old left-hander’s last start in 2020 came in World Series Game 6 against the Dodgers last fall. He had allowed two hits and was leading 1-0 when manager Kevin Cash replaced him. The Dodgers went on to score twice in that inning and win 3-1 to clinch the title.

Blake Snell, who was traded to the Padres in December in exchange for four players, reported to work with his new club Wednesday as spring training began in Peoria, Ariz.

–The St. Louis Cardinals eked into the expanded playoff field as a wild-card team last year, but optimism abounded as they opened camp in Jupiter, Fla., due in part to new arrival Nolan Arenado.

The eight-time Gold Glove winner and four-time Silver Slugger winner was acquired in a trade with the Colorado Rockies on Feb. 1.

Manager Mike Shildt said, “I understand St. Louis is a lot of warm and fuzzy even in a cold temperature right now for a lot of reasons, including Nolan. … He’s a pillar to what we’re doing as far as being strong on both sides of the baseball. And he also is a high-character guy that is super dedicated about winning and loves the game of baseball. He’s going to fit right in.”

–The Cincinnati Reds opened spring training in Goodyear, Ariz., without a clear choice of who will play shortstop this season.

–Right-hander Frankie Montas and catcher Sean Murphy were absent due to medical situations when the Oakland Athletics’ pitchers and catchers reported to spring training in Mesa, Ariz.

Montas tested positive for COVID-19, according to manager Bob Melvin, while Murphy recently underwent surgery for a collapsed lung.

Montas is at his home in Scottsdale, Ariz., and battling the virus, according to Melvin.

–The Padres signed veteran reliever Mark Melancon, MLB Network reported. Melancon, a three-time All-Star who turns 36 in March, will receive a $2 million salary in 2021 and has a $1 million buyout option for 2022, per the report.

–The Miami Marlins signed free agent outfielder Adam Duvall to a one-year contract with a mutual option for 2022. Contract terms were not announced, but reports indicated the deal is worth at least $5 million guaranteed.

Sanchez, 28, did not play last season while recovering from a shoulder injury but reportedly threw 98 mph during a bullpen session last week.

–Minnesota Twins bench coach Mike Bell is on indefinite leave after recently undergoing surgery due to a kidney cancer diagnosis.

Bell, 46, experienced symptoms in mid-July and underwent a procedure on Jan. 28 to remove the growth and surrounding tissue. Twins manager Rocco Baldelli said that doctors feel Bell will fully recover.

–Former Cleveland Indians closer Cody Allen retired, the team announced. Allen, 32, is the franchise’s all-time leader with 149 saves. He pitched for the Indians from 2012-18. In 2020, he was signed and later released by the Texas Rangers.

Reds legend to the booth

–Hall of Fame shortstop Barry Larkin is joining the Cincinnati Reds’ television broadcast booth. Veteran play-by-play man Thom Brennaman resigned in September from FOX Sports Ohio, a little more than one month after he used a homophobic slur on the air.