It’s August 1st, which means NFL preseason games are closing in. To me, that’s when football “officially” starts. The Minnesota Vikings were kind enough to allow Sportsnaut in to the “media family” for an up-close look at Vikings training camp. What did I learn in the morning walk-through? A lot.

Within minutes, it was clear things are different with the Mike Zimmer lead Vikings, than previous years. From a birds-eye view, you get a sense of confidence from the players and coaches. From Zimmer to offensive coordinator Norv Turner and defensive coordinator George Edwards, the coaches are in the players ears non-stop. To me, it seems there’s a “Glengarry Glen Ross” theme of: “ABC: Always. Be. Coaching.” 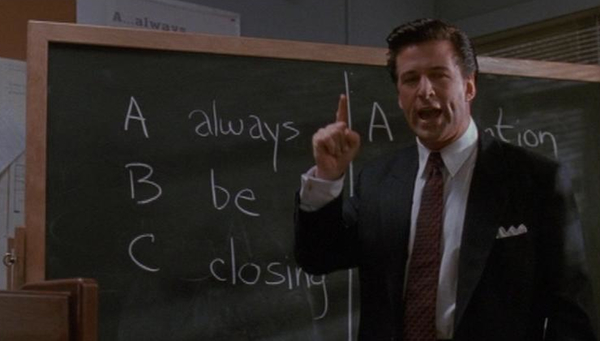 “Always Be Coaching” is clearly a theme Zimmer and his staff take pride in. Photo: alexkadis.com

Although I don’t think Zimmer has used the lines “put that coffee DOWN” or “you can’t close sh*t, YOU ARE sh*t, hit the bricks pal,” but it’s entirely possible with Zimmer’s robust vocabulary that he’s known so well for.

Matt Cassel took most of the reps with the first-team offense, while rookie Teddy Bridgewater took most of the second team reps. Remember, it’s walk through. There’s no reason to read too much into who did what, but there were some interesting nuggets that I observed during and after the morning session:

– Rookie Jerick McKinnon is going to be involved this year. Like that video game player you always loved using in multiple ways.

– Speaking of McKinnon, running back Adrian Peterson was asked after practice about McKinnnon’s progress thus far and he’s really impressed. Almost as if he’s relieved that the rookie will be a change of pace type player on offense/special teams.

– Coach Edwards and the defensive staff love the flexibility of some players. Different players are being used in different positions due to both injuries and player development.

– Special teams coach Mike Priefer wants to use the wind patterns and weather conditions of TCF Bank Stadium as a “home-field advantage.” He said visiting teams only get 30 minutes or so to prep for that, while the Vikings have been analyzing the wind for months.

– Coach Turner has weapons he wants to get involved. This could be a huge factor for the Vikings.

– First-round pick Anthony Barr is taller than you think (6’5″) when standing among other defensive players. That makes for a dangerous combo under Zimmer’s typical schemes.

– Harrison Smith is a welcomed pressence that this team missed last year. He is a gamer and Edwards was glowing in regards to having him on the field with the rest of the defensive backs.

More to come after this evening’s practice. Below are some photos for your viewing pleasure.

But for now, some images from the morning walk through. 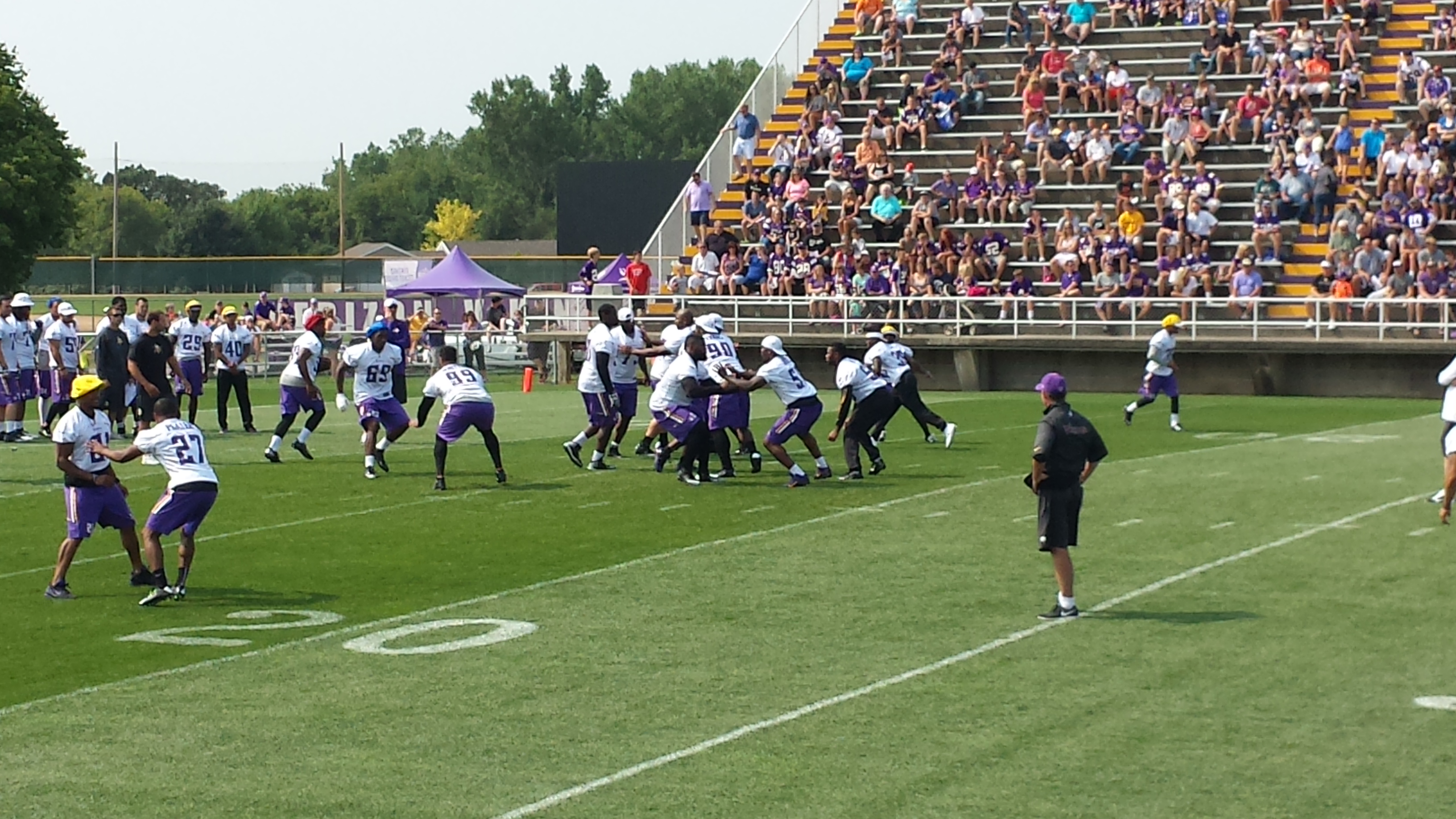 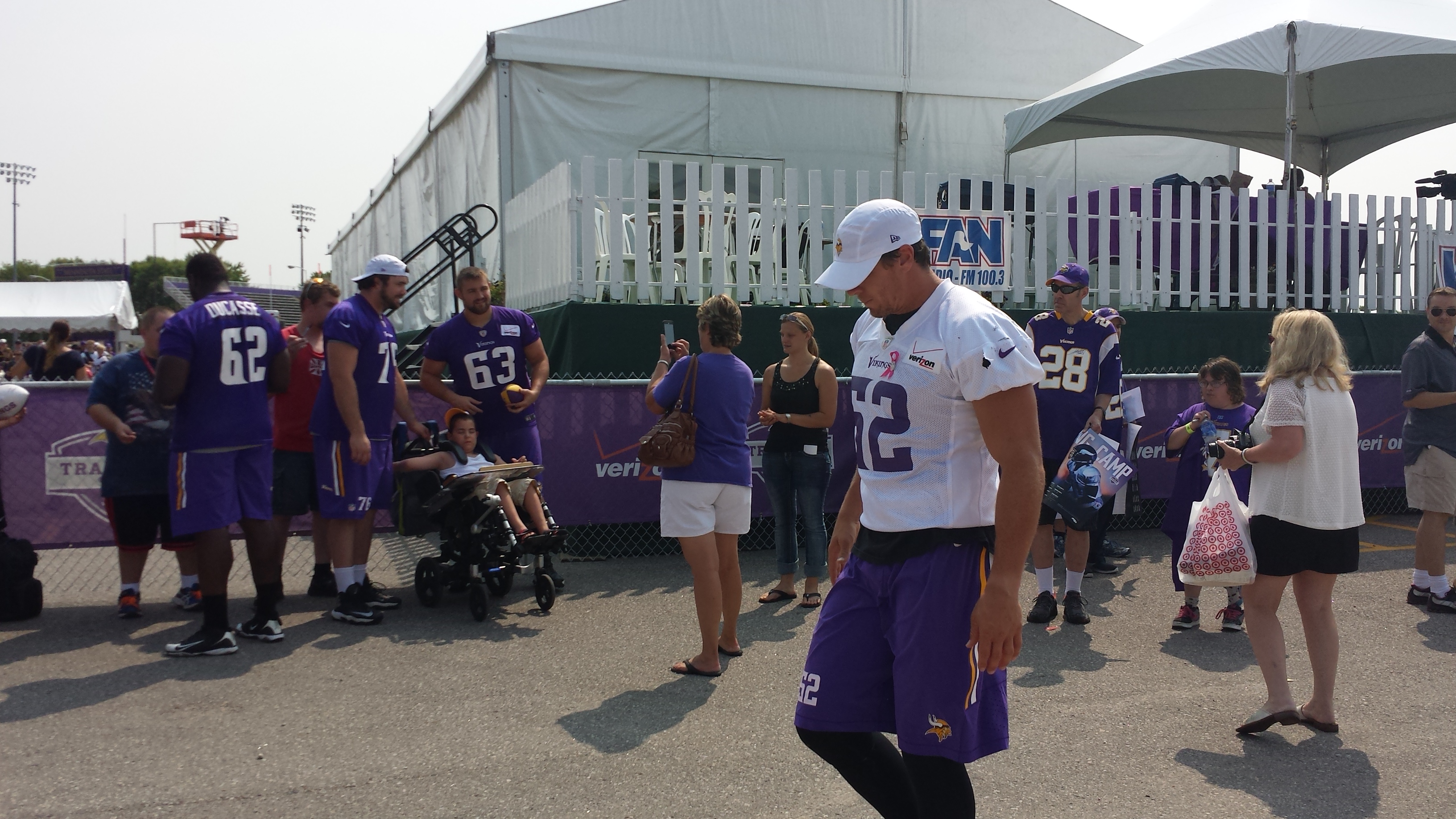 Chad Greenway will be relied upon to lead the Vikings’ defense 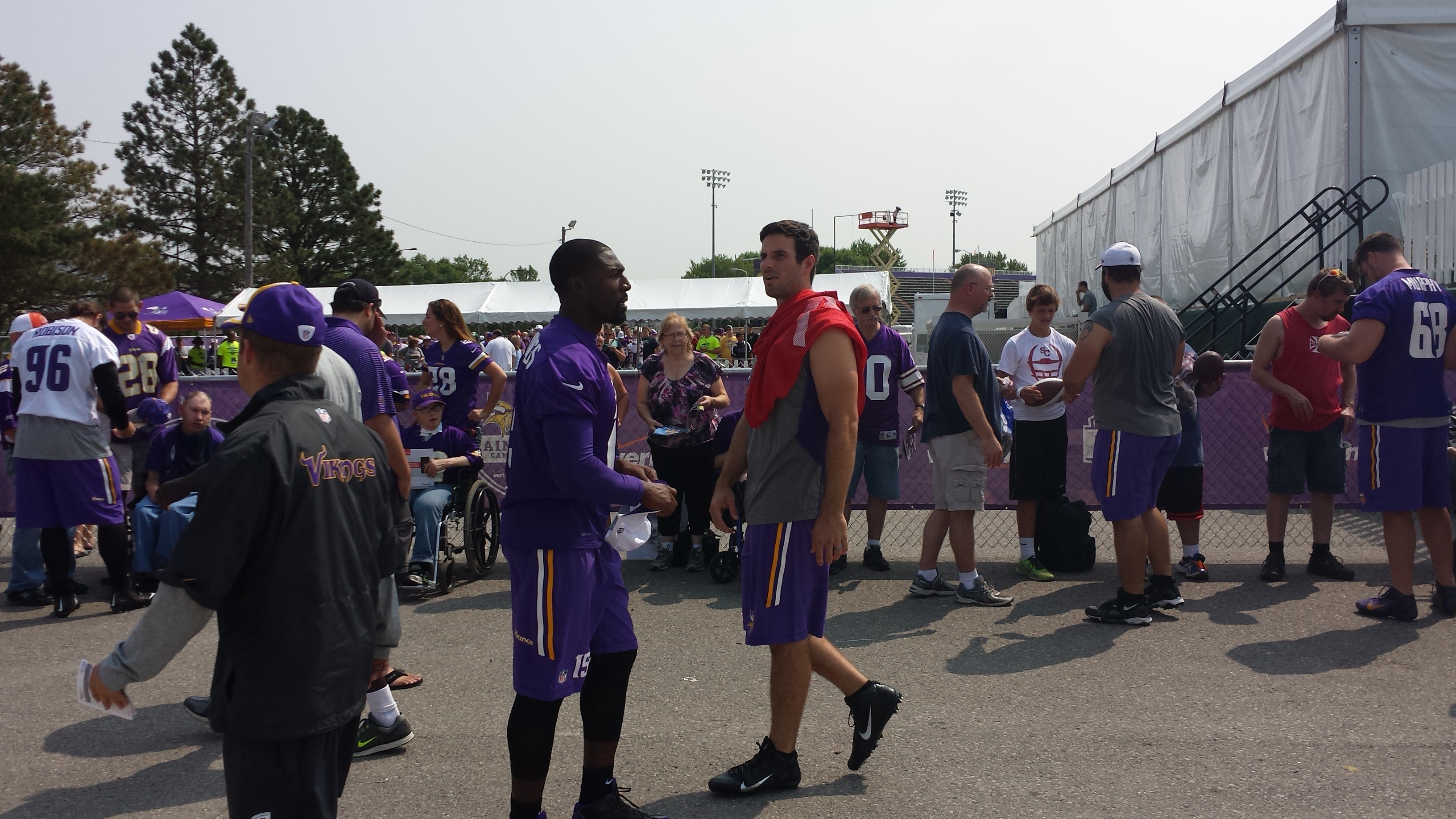 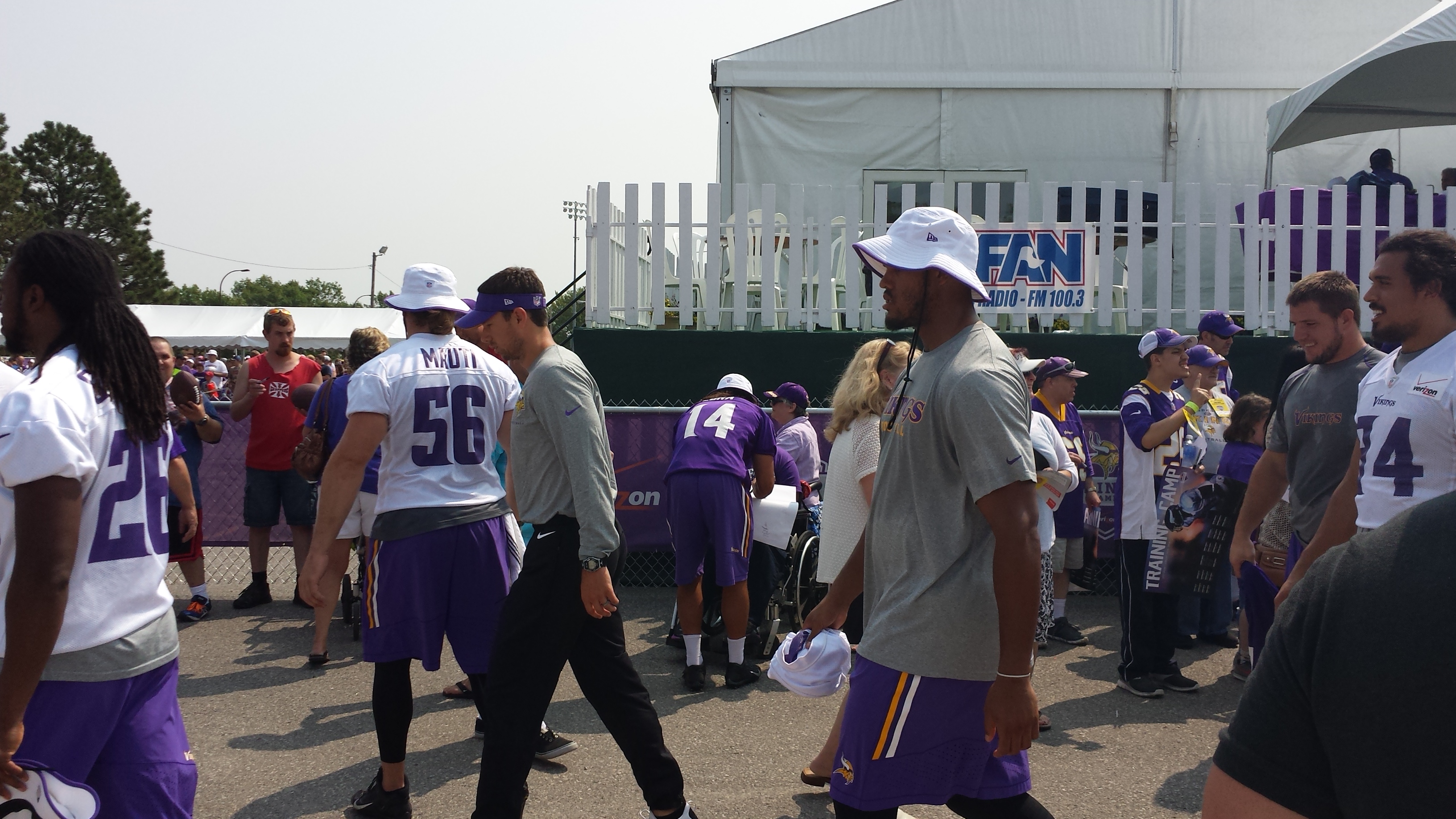 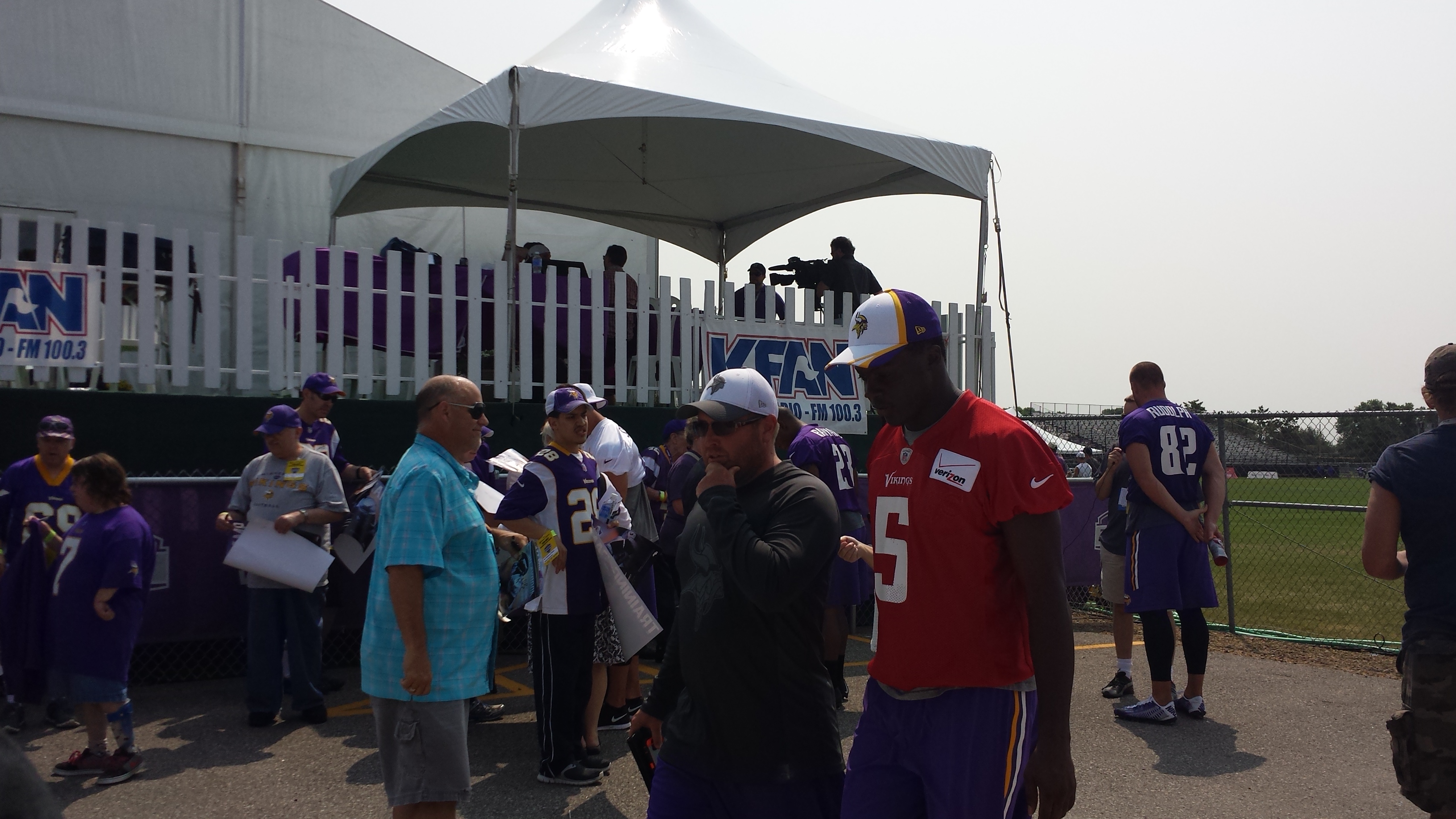 Vikings first-round pick Teddy Bridgewater, who is currently in competition for the starting QB job. 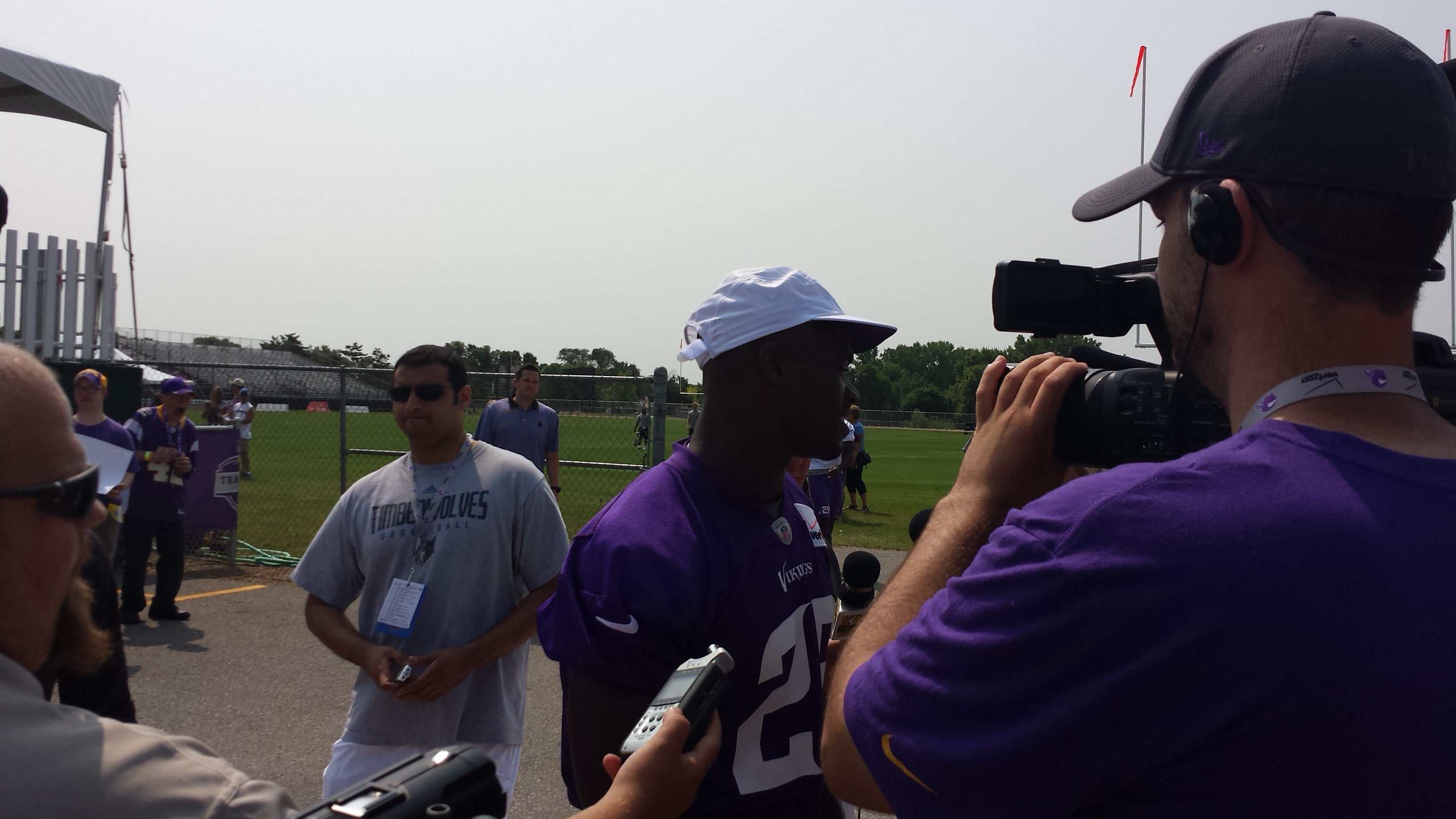