Martin Luther King Jr. is one of those historical figures that shaped the way we live today and how American society will look into the future. Without him, Barack Obama wouldn’t currently be sitting in the Oval Office. Without him, generations of Americans wouldn’t have grown up color blind. Without him, the movement towards equality in the United States wouldn’t have found its way in the post-modern world.

More than almost any other sector of society, King’s greatness and impact in the world we live today is felt in the professional sports community.

This led to an outpouring of tributes from around the sports world.

"We must learn to live together as brothers or we will perish together as fools"- Martin Luther King #MLK pic.twitter.com/4U0P2GbYt2

John Wall is wearing these special #MLKDay shoes with Kareem Abdul-Jabbar quotes on them http://t.co/UX6tlkNulm pic.twitter.com/RaQ0mz0whl

Happy #MLKDay to everyone and their loved ones today… Words to live by http://t.co/ETvo3e0iMr pic.twitter.com/crY51Tcfbx

"Every man of humane convictions must decide on the protest that best suits his convictions, but we must all protest." #MLKDay

Giving honor to the man who unselfishly gave his life so we could all be free. #HonoringMLKTodayAndEveryday pic.twitter.com/rMJWvzm8sN

Darkness cannot drive out darkness. Only light can do that. Happy #MLK Day be blessed everyone… 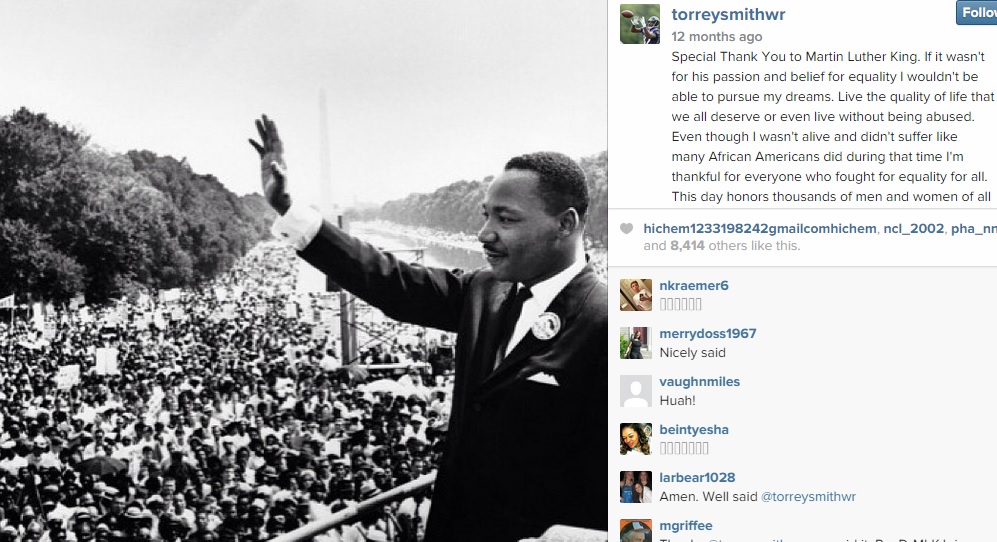 On a personal note, my first experience combining sports with Martin Luther King Jr’s impact on it was back in 1994 when the Golden State Warriors hosted the Phoenix Suns. My late grandfather purchased the tickets for himself and I. Golden State may have defeated the Suns in that game, but that’s not what I remember the most. My grandfather, who grew up during a time of racial proliferation, was a voice of reason and respect in my life. A father figure in every sense of the word, his life tips and the conversations we had remain a lasting memory in my life.

That day comes to mind in particular. As just a young pup, I didn’t understand full well King’s impact on my life. Pointing out Suns players Dan Majerle and A.C. Green embracing one another after the latter scored, my grandfather simply said “that wouldn’t have been possible without Mr. King.” It was simple, but it still sticks with me to this day.

So as we prepare to put this holiday behind us, let’s just forget what this great man did for us all. It’s something that is embedded within the fabric of our national conscience and will continue to play a role in generations in the future.