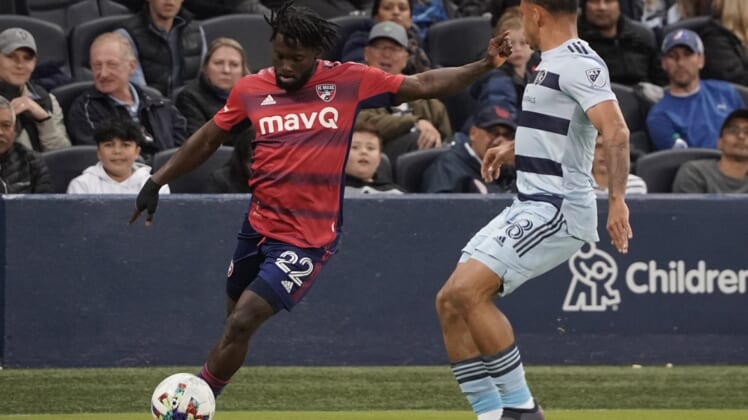 Jesus Ferreira scored his sixth goal of the season and FC Dallas increased their MLS-best unbeaten streak to seven matches with a 2-2 tie against host Sporting Kansas City on Saturday night.

Johnny Russell and Daniel Salloi scored goals for Sporting Kansas City (2-6-2, 8 points), who are mired in a five-match winless stretch (0-3-2).

FC Dallas played the final 29 minutes — including six minutes of stoppage time — with just 10 players after Brandon Servania drew a red card for tripping in the 67th minute.

The two goals were a season high for Sporting KC, who had just six entering the match.

Sporting Kansas City had a 15-9 edge in shots and placed five on target to Dallas’ four.

Russell gave Sporting KC a 1-0 lead in the 22nd minute when he lined up for a penalty kick and sent a high left-footed shot over Paes into the right corner. It was Russell’s second goal of the season and sixth career goal in 10 matches against FC Dallas.

FC Dallas knotted the match 14 minutes later when Velasco scored his second goal of the season on a free kick outside the box. Velasco’s boot from the left flank went over the reach of Melia and slightly glanced off the head of Sporting KC’s Kortne Ford en route to landing in the top right corner.

FC Dallas moved ahead in the 42nd minute when Paul Arriola was in the midfield and sent a pass to Ferreira, who navigated downfield. Ferreira cut toward the center and his right-footed shot found the right corner of the net.

Salloi had two strong chances in back-to-back minutes early in the second half.

Paes made a diving stop of Salloi’s right-footed shot on the first attempt in the 56th minute. One minute later, Salloi chipped the ball with his right foot over Paes but FC Dallas’ Jose Martinez was stationed on the goal line and cleared the ball.

Salloi received another chance in the 77th minute and didn’t waste it. He received a pass from Cam Duke and turned and sent a left-footed shot just past Paes to tie the score.