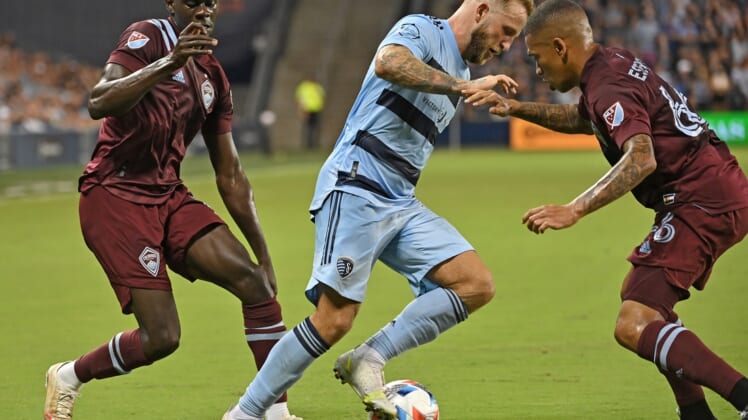 The MLS season is a series of adjustments. Early in the season, clubs are trying to blend in new teammates and/or styles of play. The goal for coaching staffs is to make those adjustments quickly.

For Sporting Kansas City, the 2022 season already is “in form” as manager Peter Vermes’ club has experienced a road match and one at home, and they’ve suffered a loss and tasted victory.

“There’s not really much newness to the start of the season, because we’ve already played two games,” he said. “We played one away and one at home. Now it’s about trying to stay focused on us and getting prepared for each individual opponent, because each one presents unique challenges.”

Colorado has been a challenge on the road for Sporting, which is 0-4-4 in its last eight matches in Commerce City, Colo. Vermes said that’s because of the quality of the team, and the location.

“They’re a good team,” he said. “You can always throw in altitude as a part of that. They do well at home. Everybody tries to take advantage of conditions (like) climate or elevation. It’s a very tough place to play.”

The Rapids also opened with a loss on the road (3-0 at LAFC), then responded with a 3-0 home shutout over Atlanta United last Saturday to even their record. That’s the same Atlanta side that defeated SKC 3-1.

“They’re a team that, over the last 10 years, has been really consistent,” he said. “They know their roles. They’re a team that is well-choreographed and rehearsed. They occupy great spots that create uncertainty for the opposition.”

Colorado’s offense is built around former Kansas City forward Diego Rubio, who had a goal and an assist in the Rapids’ win over Atlanta, which earned him a spot on the MLS Team of the Week.

“I’m feeling very good,” he said after the Atlanta match. “We attacked them, we pressed them, we were very consistent. We won, we got a clean sheet, so we’re happy and I’m happy.”