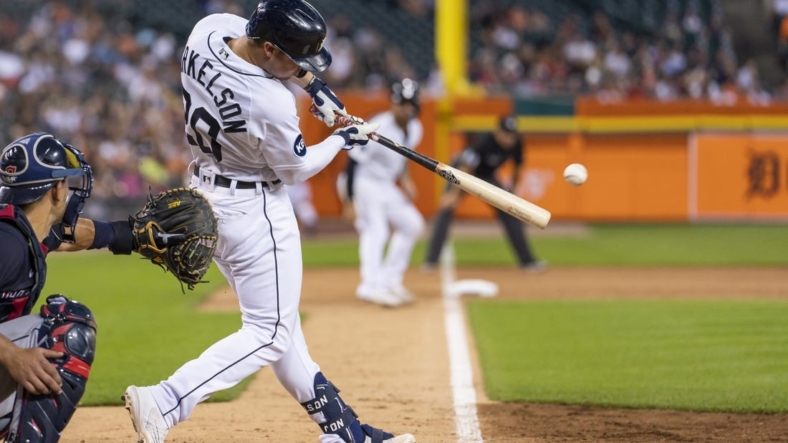 Spencer Torkelson believes the second chapter of his big-league career will be much more productive than the first.

Torkelson, the top pick of the 2020 draft, will be in the Detroit Tigers’ lineup when they face Kansas City on Friday.

Torkelson was expected to be a Rookie of the Year candidate this season, but he never got into an offensive groove. He batted .197 with five homers in 83 games before getting demoted to Triple-A Toledo.

He was recalled when rosters expanded to 28 players on Thursday.

“I want him to use it as a lesson learned,” manager A.J. Hinch said. “In all aspects, there is the success and failure portion of life. You use the failures to find whatever is next for you — what you’ve learned and how you’ve done it. But if you continue to harp on the bad times, you’re going to bring that into today — and that’s not psychologically healthy, either.”

Torkelson didn’t set Triple-A on fire, batting .229 with five homers in 35 games, but he has regained confidence in recent weeks.

“As much as I didn’t want to go down, I think in the long run it was a good move,” he said. “I’m going to be better because of it. I learned a lot. Adversity makes us all better.”

Ryan Kreidler, who was also promoted on Thursday, is expected to make his major-league debut at second base.

“It was the culmination of a lot of work. You just never know,” Kreidler said. “There are no guarantees in this game. Everything is earned. So I am really proud of that and excited to be here and help this team win games.”

Hutchison collected his second victory of the season in his last start, holding Texas to two runs and four hits in 5 1/3 innings on Sunday.

Despite his record, Hutchison has kept the Tigers close in recent starts. He has allowed just 10 earned runs in his last six starts.

Hutchison tossed three innings of scoreless relief against the Royals in April. He’s 2-1 with a 4.70 ERA in five career outings against Kansas City, including three starts.

Left-hander Daniel Lynch (4-9, 4.70) will oppose Hutchison. Lynch has two losses and a no-decision in his last three outings. He has given up 10 earned runs during that span, including four runs and nine hits to San Diego in five innings on Saturday.

Lynch did record six strikeouts, which he attributed to improved slider movement.

“We kind of figured out that I changed my grip and didn’t realize that I’d done it,” Lynch said. “So just going back to that, I felt like it was pretty good (Saturday). … It was very minor, but I guess it makes a big difference. I can tell by the break of it. I think it’s a small change that you might not be able to notice; but, to my eyes, I can tell the difference in the break.”

Both teams will be looking for a turnaround. The Tigers were swept in a three-game home series with Seattle, while the Royals were defeated by the Chicago White Sox in their last two outings.