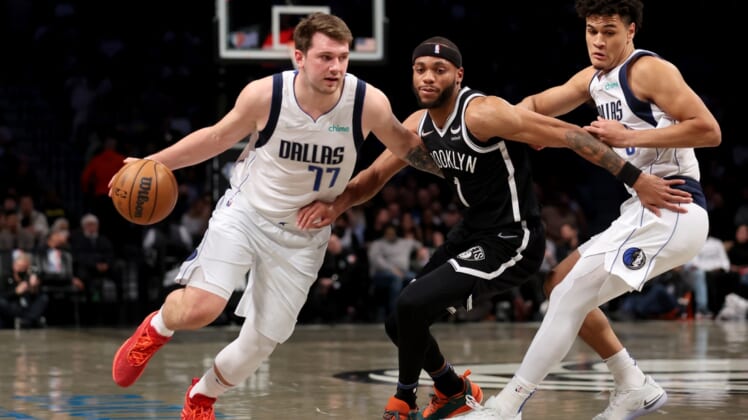 Spencer Dinwiddie beat his former team by hitting the game-winning 3-pointer with one second remaining as the surging Dallas Mavericks overcame another double-digit deficit and pulled out a dramatic 113-111 victory over the Brooklyn Nets Wednesday night in New York.

Dinwiddie was guarding Kevin Durant when the superstar hit a 27-foot 3-pointer from the left wing with 10.6 seconds remaining to give the Nets a 111-110 lead.

After Dallas used a timeout, Dinwiddie inbounded the ball from the baseline under Brooklyn’s hoop and Doncic brought the ball up the floor. When Durant and Nicolas Claxton went to double team Doncic at the 3-point line, Dinwiddie got the ball and hit a 25-foot 3-pointer in front of Brooklyn’s bench over Goran Dragic to win it.

Dinwiddie’s game-winner gave Dallas its eighth win in nine games and its 15th comeback from a double-digit deficit this season. It also was Dinwiddie’s second straight game-winner after the former Brooklyn guard hit the game-winning 3-pointer Sunday in Boston.

Doncic led all scorers with 37 points to go along with nine points and nine rebounds. Dinwiddie added 15 of his 22 in the fourth quarter when Dallas outscored Brooklyn 34-20.

Durant constantly encountered double teams and led the Nets with 23 points and 10 assists on 8-of-20 shooting. Dragic added a season-high 21 points and Bruce Brown chipped in 17 as Brooklyn shot 49.5 percent and saw a four-game winning streak stopped after taking a 12-point lead into the fourth.

Andre Drummond added 14 points and 17 rebounds while Nic Claxton finished with 13 and rookie Kessler Edwards chipped in 12 for Brooklyn.