The Washington Wizards are going to have to wait for their new starting point guard Spencer Dinwiddie to arrive from the Brooklyn Nets in a sign-and-trade deal, because there are some serious logistics to work out.

According to Blue Wire Wizards insider Quinton Mayo, that Dinwiddie sign-and-trade is supposedly going to involve at least six, and as many as eight teams:

Never again will this author trip over trolling criticism about “ridiculous” hypothetical trade scenarios, because let’s face it, this is about as outlandish as you could possibly get.

Unclear exactly which teams are involved in this mega transaction, but Dinwiddie is eventually going to replace Russell Westbrook in Washington’s backcourt next to Bradley Beal.

This continues a bizarre history for Dinwiddie, who went from relative obscurity in Detroit, to relevance with the Nets, to being the odd man out once Brooklyn acquired Kevin Durant, Kyrie Irving and James Harden.

Oh, and he attempted to start a GoFundMe campaign for an NBA contract. Now he’s the inflection point for one of the strangest transactions in basketball history.

The bigger question is, will the Los Angeles Lakers have any role in this blockbuster? 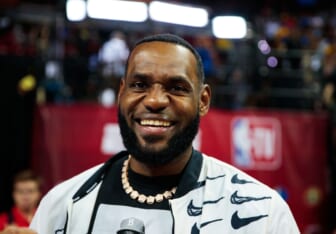 It seems pretty cut and dry that they gave up fair compensation to Washington to acquire Westbrook. However, based on the sheer numbers involved here, there’s at least a 24% or thereabouts chance that the Purple and Gold are part of this sign-and-trade, too.

Rumors coming out of LA suggest Dennis Schroder could still be part of a sign-and-trade package that sends him to either Washington or the New York Knicks. Getting rid of Schroder could also mean the Lakers make way for Sacramento Kings sharpshooter Buddy Hield, who was squarely on LA’s radar before news broke that the Westbrook trade was happening.

Whatever happens from here, we could be in for a few surprises once this epic six- to eight-team deal becomes official.