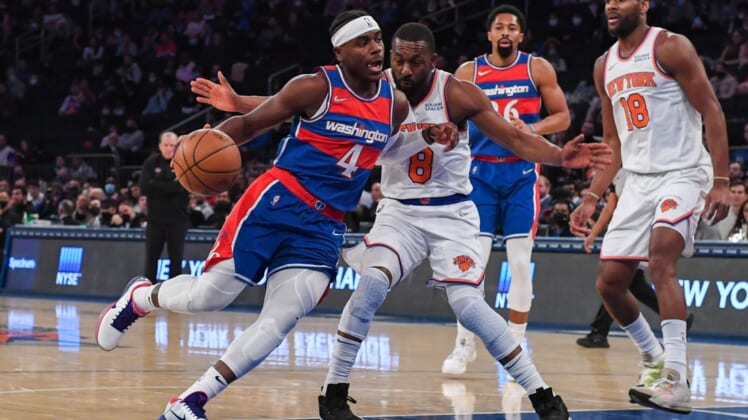 Spencer Dinwiddie collected 21 points and 12 assists as the visiting Washington Wizards overcame a 44-point performance by Kemba Walker in a 124-117 victory over the New York Knicks on Thursday.

Rookie Corey Kispert scored a season-high 20 points in his first career NBA start for the Wizards, who played without leading scorer Bradley Beal. Beal joined fellow starter Kentavious Caldwell-Pope in the NBA’s health and safety protocols prior to the game.

Walker made seven 3-pointers to continue his recent torrid surge. The New York native has scored 94 points in three contests since returning from a nine-game benching.

Julius Randle collected 23 points and nine rebounds and Alec Burks had 20 and seven, respectively, for the Knicks, who have lost nine of their last 12 games.

Evan Fournier drained a 3-pointer to trim Washington’s lead to 109-107 with 2:43 remaining in the fourth quarter before Holiday countered with one of his own on the ensuing possession.

Kuzma followed a pair of free throws by Randle and Mitchell Robinson’s layup with a pair of 3-pointers to push the Wizards’ advantage to 118-111 with 56.6 seconds to play.

A three-point play by Burks cut into the deficit, however Fournier missed a 3-point attempt and the Wizards sealed the win at the free-throw line.

Washington erased a seven-point halftime deficit by scoring 25 of the first 36 points to begin the third quarter to claim an 82-75 lead. Kispert capped that run by sandwiching 3-pointers around two free throws, however, Walker stayed hot by draining two 3-pointers are part of a nine-point surge spanning 64 seconds.

Kispert made a 3-pointer, a long-range jumper and a putback to finish with seven points as Washington shot 11 of 21 from the floor to seize a 31-27 lead after the first quarter.

New York countered with a 37-point outburst in the second quarter, with Walker capping the surge with three jumpers to stake the Knicks to a 64-57 advantage at intermission.