South Carolina will turn to an unlikely option at quarterback Saturday when it welcomes Eastern Illinois to Columbia, S.C.

Noland most recently played at North Dakota State after transferring from Iowa State. He played in 24 career games for his first two schools and passed for 721 yards with five touchdowns and six interceptions for the Bison last season.

“I know what the narrative may be out there, so let’s forget about it and lose the narrative that (Noland) hasn’t played a football game in two or three years and he was walking up and down the hall like Uncle Rico talking about what he did back in the day as a quarterback,” coach Shane Beamer said Tuesday. 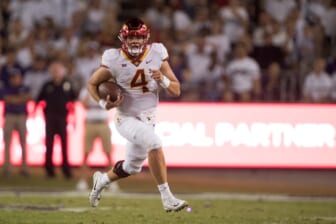 “He played quarterback a couple of months ago — three months ago. He’s been a graduate assistant coach since June. Like I told you when we activated him to our roster, he’s played in a college football game a hell of a lot more recently than anybody on our team,” Beamer said.

Noland moved from coach to quarterback when Luke Doty injured his foot earlier in the preseason. Noland then shared practice time with redshirt senior Jason Brown, who will be Noland’s backup this weekend.

On the other side of the ball, South Carolina boasts all-SEC preseason first-team selection Kingsley Enagbare. The senior pass rusher owns career totals of 10.5 sacks and 17 tackles for loss.

South Carolina allowed at least 41 points five times during the team’s season-ending six-game losing streak last year. The Gamecocks finished the campaign at 2-8, their fewest wins in a season since 1999.

Eastern Illinois opened its 2021 campaign with a 26-21 loss at Indiana State last weekend. The Panthers committed three turnovers, including two interceptions of passes thrown by Otto Kuhns (14 of 29, 253 yards).

“We had a strong effort on both sides of the football, but we didn’t do those little tiny things that add up to victory,” coach Adam Cushing said.