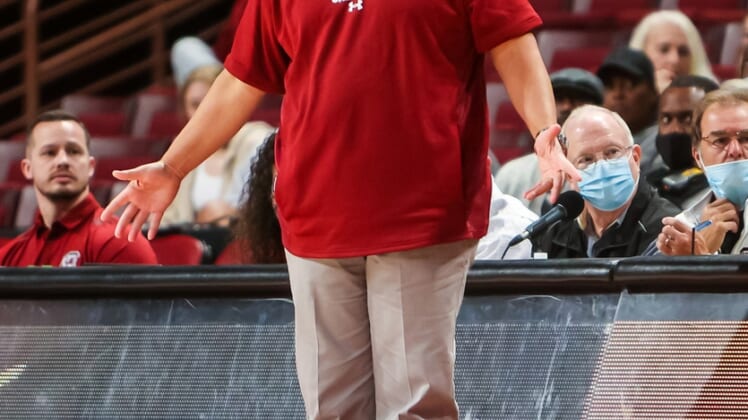 Wildens Leveque and Devin Carter each scored 12 points and Keyshawn Bryant and Brandon Martin added 10 points apiece as South Carolina rolled to a 110-51 victory over visiting Allen University on Tuesday in Columbia, S.C.

Leveque went 5-for-6 from the field and Carter shot 6-for-9 for the Gamecocks (8-2), who won their third straight game and have two more wins than they had during all of the 2020-21 season.

The Gamecock’s 110 points tied for the 11th-most scored in a game in program history, while the 59-point margin of victory ranks fifth all-time.

Martin shot 5-for-8 and grabbed a game-high 11 rebounds, with Bryant going 4-for-9 from the field. Chico Carter and James Reese each made three 3-pointers to finish with nine points apiece, as South Carolina had no trouble keeping overmatched Allen (0-9) winless.

The Gamecocks made quick work of the Yellow Jackets. South Carolina broke open a 6-6 tie by going on a 26-4 run to take a 32-10 lead on Chico Carter’s 3-pointer with 8:15 left in the first half.

South Carolina had 12 of its 13 players who played in the first half score, though none had more than Chico Carter’s nine points.

The Gamecocks’ 51-22 halftime advantage marked their largest lead of the half, when they shot 46.5 percent (20-for-43) from the field and 31.6 percent (6-for-19) from 3-point range. The Gamecocks outrebounded the Yellow Jackets 30-11, converted Allen’s eight turnovers into 17 points and outscored them 24-8 in the paint during the opening 20 minutes.