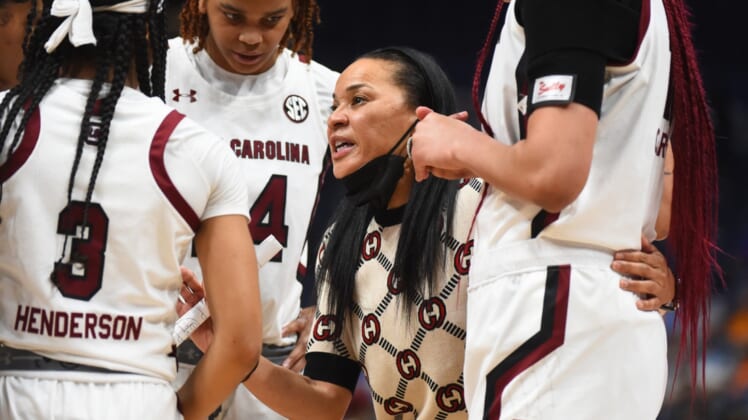 South Carolina earned the top overall seed in the NCAA Women’s Basketball Tournament on Sunday night and North Carolina State, Stanford and Louisville joined the Gamecocks as No. 1 seeds.

Louisville edged out Baylor for the fourth No. 1 seed. The Lady Bears were seen as a challenger for the one line before losing to Texas on Sunday in the Big 12 tournament title game. Baylor received a No. 2 seed in the Wichita, Kan. region, the same as Louisville’s.

South Carolina went 29-2 in the regular season, with one of its only blemishes coming in the SEC tournament championship game when Kentucky won 64-62 on a 3-pointer with 4.2 seconds left.

The 2022 tournament marks the first time that the women’s field features 68 teams, up from the previous total of 64. The men’s tournament expanded to 68 in 2011.

In a “First Four” style that parallels the men’s bracket, DePaul and Dayton will face off Wednesday for one of the No. 11 seed spots. Florida State will play Missouri State on Thursday in the other First Four play-in round for another No. 11 line.

NC State could end up facing No. 2 seed UConn in the regional final in Bridgeport, Conn., where the crowd would favor Paige Bueckers and the Huskies.

South Carolina’s toughest competition in the Greeensboro, N.C. region is No. 2 seed Iowa, led by Big Ten Player of the Year Caitlin Clark.

Defending champion Stanford heads up the Spokane, Wash. region, with Texas the No. 2 seed. LSU is the third seed there in Kim Mulkey’s first season coaching the Tigers.

The Final Four and national title game will take place on April 1 and 3 in Minneapolis.