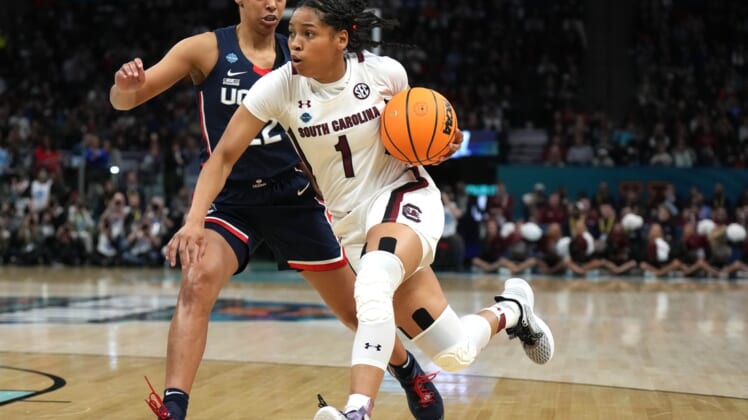 South Carolina (35-2) also won in its only other title game appearance in 2017. UConn (30-6), appearing in its 14th consecutive Final Four, was bidding for its first title since 2016, which capped a streak of four straight championships.

Henderson scored eight points in an 11-2 run that put the Gamecocks in front 57-41 with 4:18 remaining. The senior guard hit 9 of 20 shots, including 3 of 6 from beyond the arc, and dished out four assists.

Boston, the consensus player of the year, led South Carolina to a commanding 49-24 rebound advantage with her 30th double-double of the season.

Paige Bueckers, a high school star at nearby Hopkins, Minn., had 14 points for UConn. Bueckers, the player of the year last season as a freshman, hit 6 of 13 shots and had a team-high six rebounds. She missed 19 games this season with a knee injury.

South Carolina led by 18 early in the second quarter but saw UConn rally within 35-27 at the half. The Gamecocks opened the third quarter with an 8-0 run to push the lead to 43-27.

Caroline Ducharme and Evina Westbrook hit back-to-back 3-pointers to cap a 10-point run that cut the lead to 43-37. The Gamecocks led 46-37 entering the final period.

South Carolina led 22-8 after one quarter and stretched it to 30-12 on Henderson’s 3-pointer. Bueckers, who missed her only shot in the first period, scored nine points in the second quarter.

South Carolina had a 25-13 edge on the glass in the first half, including 16 offensive rebounds for a 17-2 advantage in second-chance points.

The Gamecocks dominated inside immediately, opening an 11-2 lead behind seven second-chance points.

South Carolina hit 10 of 20 shots in the opening period, along with a 12-3 edge on the boards. The Gamecocks also forced five turnovers, while committing none.

South Carolina, which also defeated UConn 73-57 in November, lost its two games this season by a combined three points.