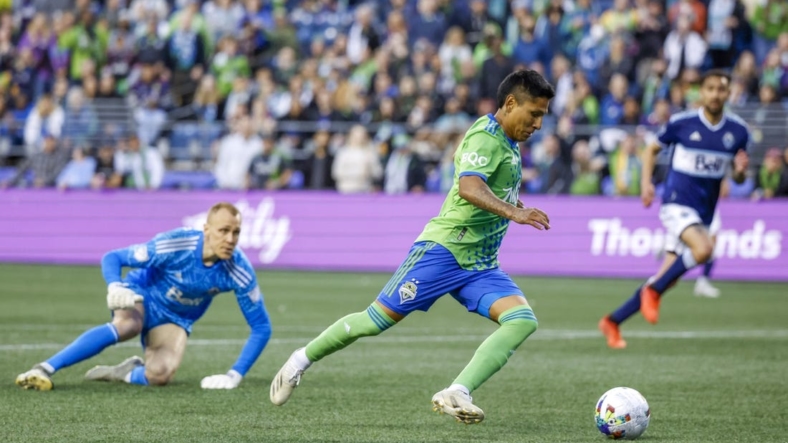 The Vancouver Whitecaps kept their slim MLS playoff hopes alive with a 3-0 victory against the visiting Los Angeles Galaxy on Wednesday.

They’ll look to do the same when they play their Cascadia Cup rivals, the Seattle Sounders, on Saturday night at Vancouver.

“I told the guys that this is a statement win to say that we’re not giving up, we’re not bottling this season,” Whitecaps defender Jake Nerwinski said. “You know, after three hard weeks, this is a huge win for us and for the club and for all the guys.

“It keeps us alive. I know it’s a long shot. … We’ve just got to keep building off of performances like this and take it one game at a time. It’s good that we have two more home games left.”

The Sounders (12-15-3, 39 points) are also trying to track down RSL as they attempt to avoid missing the postseason for the first time since joining MLS in 2009. Seattle has a game in hand on each of the teams currently in playoff position in the West.

The Sounders should be well-rested after having not played since last Saturday’s 3-0 victory against Austin FC. Raul Ruidiaz scored twice as Seattle won its second straight.

“We still have a lot of work to do,” Sounders forward Jordan Morris said.

The Sounders are unbeaten against the Whitecaps in the past 15 meetings (10-0-5) dating back to 2017. That includes a 4-0 decision June 14 in Seattle, in which Ruidiaz tallied twice. The Peruvian international has eight goals in eight career matches against Vancouver.

The Whitecaps will be without leading scorer Lucas Cavallini, who is serving the finale of his four-game suspension for violent conduct.