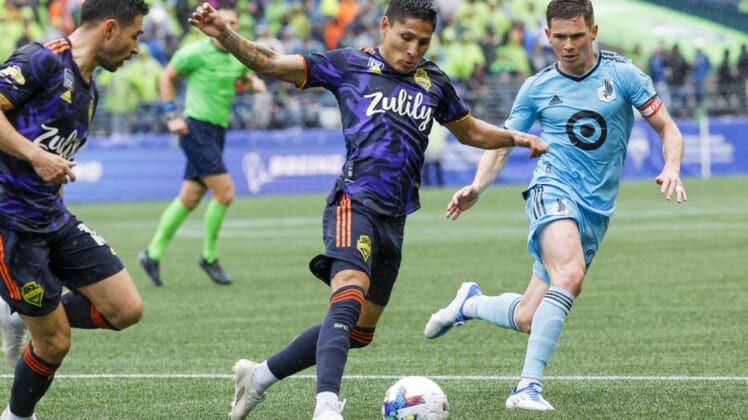 Cristian Roldan put his side ahead on a powerful effort from distance late in the second half and the Seattle Sounders rallied from an early deficit to a 3-1 win over visiting Minnesota United on Sunday afternoon.

Roldan’s 74th-minute drive into the top left corner was the moment of brilliance the Sounders (3-5-1, 10 points) needed to snap a three-match losing streak in league play.

Roldan also earned the penalty that Raul Ruidiaz converted five minutes after halftime for his first goal of the regular season. And he assisted Nicolas Lodeiro’s second of the year deep in second-half stoppage time to make the winning score more comfortable than the match suggested.

Robin Lod scored his team-leading fourth goal of the season for Minnesota (4-5-2, 14 points), which has now lost in all six of its regular-season trips to Seattle since joining MLS in 2017.

The Sounders had been playing second-choice lineups in some of their previous defeats while also competing to win the CONCACAF Champions League over Mexico’s UNAM Pumas in a series that concluded on May 4.

But against a first-choice lineup, it looked like St. Clair’s efforts might be enough to earn the visitors a favorable result after arguably his best stop of the evening denied Albert Rusnak in the 71st minute.

Three minutes later, though, Roldan stepped up. He took a pass from Ruidiaz just beyond the penalty area, turned and initially looked to play a pass. When none materialized, he snapped off an exceptional right-footed strike from 24 yards that left Minnesota’s keeper little chance.

Earlier, Roldan reached Rusnak’s well-weighted through ball and absorbed a foul from Wil Trapp to draw the penalty.

While Lodeiro typically takes Seattle’s penalties, he allowed Ruidiaz the opportunity. The Peruvian, who led the Sounders with 17 MLS goals in 2021, responded by converting to break his 2022 league drought.