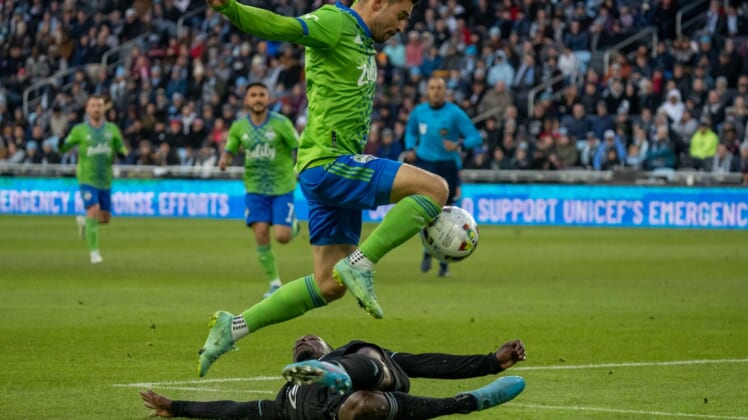 Joao Paulo had a goal and the Seattle Sounders scored the game-winner on an own-goal to defeat Minnesota United, 2-1, on Saturday night in Saint Paul, Minn.

Stefan Frei made three saves for Seattle (2-2-1, 7 points), which snapped a six-game road winless streak. The Sounders also improved to 9-1-1 all-time against the Loons.

Seattle then took a 1-0 lead in the 38th minute on Paolo’s first goal of the season. Midfielder Nicolas Lodeiro picked up an assist on the play with a crossing pass to an uncovered Paulo outside the center of the box. Paulo then drilled a right-footed shot into the top right corner of the goal.

The Sounders increased their lead to 2-0 in the 49th minute on an own-goal by Loons defender Kallman. U.S. National Jordan Morris set up the score, racing up the left side of the pitch on a counter-attack and then attempting a crossing pass near the six-yard box that Kallman deflected into the left side of the goal.

Minnesota cut it to 2-1 in the 82nd minute on Reynoso’s first goal of the season. The left-footed penalty shot into the right corner came after Sounders defender Jackson Ragen knocked down midfielder Joseph Rosales in the penalty box.

The Loons nearly tied it in the 88th minute, but Luis Amarillo’s right-footed rebound try from outside the six-yard box rolled just wide of the left post.