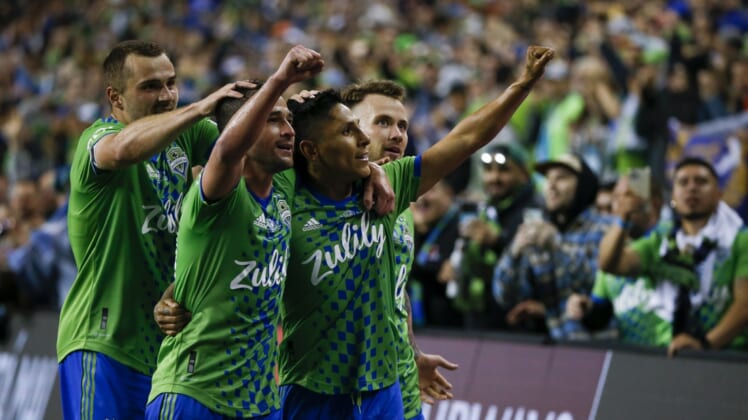 After winning the CONCACAF Champions League and exiting the U.S. Open Cup, the Seattle Sounders hope to begin a climb up the MLS standings Sunday when they host Minnesota United.

The Sounders (2-5-1, 7 points) entered the weekend second from bottom of the Western Conference table after a spring when they have put much of their focus on becoming the first MLS team to win the Champions League.

They secured that honor on May 4 when they closed their two-game final with a 3-0 win over Mexican opponents UNAM Pumas.

The Sounders followed that with a 2-0 MLS loss at Dallas last weekend — their third consecutive MLS defeat — then crashed out of the Open Cup on penalties following a 2-2 draw with San Jose on Wednesday night.

So Sunday’s encounter represents a return to the grind for a Seattle team that still expects to reach the MLS postseason, although star midfielder Joao Paulo is lost for the season with a knee injury sustained in the CCL final.

“We’re completely confident,” Morris said. “We have a couple games in hand that we need to win for sure, and we know that there’s a lot of season left to play. We know we’re better than where we are, and we know we put a huge emphasis on Champions League. So that had an effect on where we are as well.”

For once the Sounders will have the rest advantage on an opponent.

“Well one thing I do know, you don’t feel as tired when you win,” manager Adrian Heath said afterward. “Hopefully, you know … we will get a couple of days to relax and do a little light session on Saturday because it’s a big game on Sunday. It’s never easy going to Seattle for sure.”

The Loons are 0-6 in previous trips to Seattle and are 1-9-1 all time against the Sounders.

Midfielder Robin Lod returned to action as a second-half substitute for after he missed Minnesota’s 1-0 loss to FC Cincinnati last weekend due to illness.

Lod’s three goals lead the Loons, who have been held scoreless in back-to-back MLS matches.