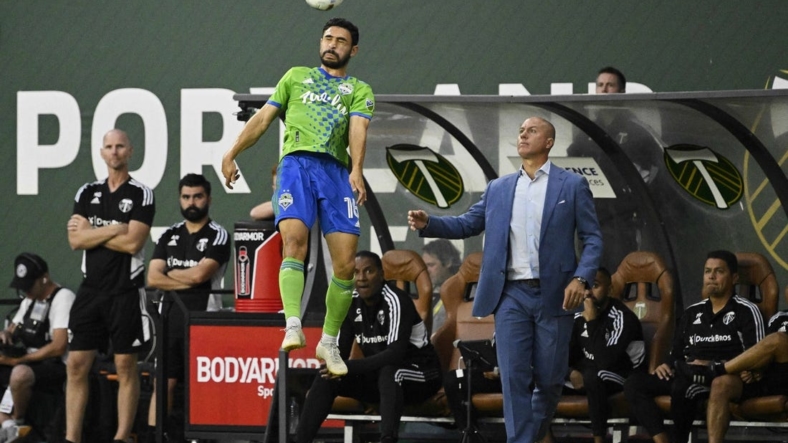 The Seattle Sounders will be fighting for their playoff lives when they visit Orlando City on Wednesday night.

The Sounders (10-14-3, 33 points) have reached the postseason every year since joining MLS in 2009. But that 13-year streak is in serious jeopardy after Friday night’s 2-1 loss to the rival Portland Timbers.

Yeimar Gomez scored early for Seattle, but Portland tied it on a controversial penalty kick — on a foul assessed to Gomez — that Dairon Asprilla converted just before halftime. Then Sebastian Blanco’s goal six minutes after the break was enough to seal all three points for the Timbers, while making it four matches without a win (0-3-1) for the Sounders.

Seattle begins the week in 10th in the Western Conference, three spots beneath the playoff line.

“I think the mentality of the group is still there,” Seattle coach Brian Schmetzer said. “We will fight to the very bitter end. But again, it’s two tough (results) — one draw, one loss — in a row, so the real test will be Orlando. Traveling across the country, playing an opponent we don’t know very well, we’ll have to regroup for that one for sure.”

Orlando (11-10-6, 39 points) is closer to securing its spot in the postseason after a second consecutive dramatic victory on a goal from substitute striker Tesho Akindele.

This time, the Canadian forward scored on the very last play of the game, heading in a corner kick in the sixth minute of second-half stoppage time to seal a 2-1 win over New York City FC on Sunday night.

That took Orlando into sole possession of fifth in the East and four points clear of the playoff line. The Lions are on a season-long three-match winning streak, and with a victory Wednesday can even their record at home — where they’ve struggled — to 7-7-0.

After Sunday, Pareja credited Akindele — who hadn’t scored prior to these last two games — and other substitutes for pushing the team to a crucial result.

“They lifted us, they took the team on their shoulders and gave us that energy that we needed,” Pareja said. “And more than the energy, the ideas.”