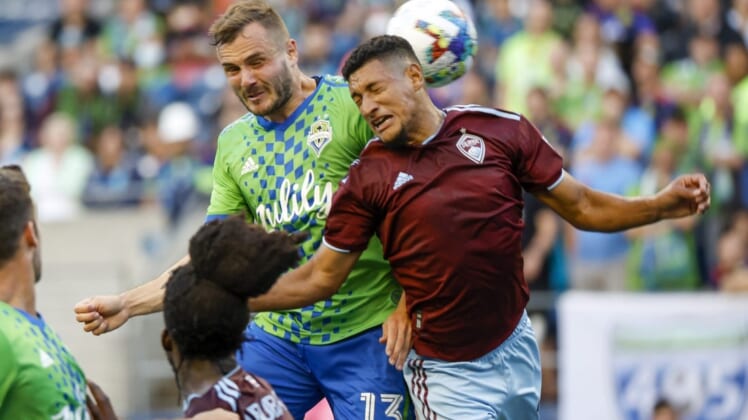 Nicolas Lodeiro scored on a penalty kick in the 71st minute as the Seattle Sounders, despite playing nearly the entire second half with 10 men, defeated the visiting Colorado Rapids 2-1 Saturday night in an MLS match.

Jordan Morris also scored for Seattle (9-10-2, 29 points), which snapped not only a three-game skid but also a 343-minute scoreless streak.

Morris also drew the deciding penalty, as his initial shot was stopped by Rapids goalkeeper William Yarbrough, but Morris hustled to the rebound and reached the ball just before Yarbrough could get a hand on it. Morris tripped over him in the middle of the penalty area, and Lodeiro hammered the ensuing kick into the right side of the net.

Jonathan Lewis scored for the Rapids (6-9-6, 24 points), who missed a chance for their first road victory of the season.

Seattle was short-handed after Kelyn Rowe was sent off after receiving his second yellow card of the match in the 47th minute.

Lewis opened the scoring in the third minute. He made a run into the penalty area and got behind center back Yeimar Gomez Andrade while taking a diagonal pass from Diego Rubio. Lewis dribbled around sprawling Seattle goalkeeper Stefan Frei and took a sharp-angled shot from the right wing, with the ball barely going over the goal line before the Sounders’ Alex Roldan could clear it.

Seattle had several chances before finally evening the match in the 42nd minute.

Lodeiro took a quick free kick in his own end of the field and put a long pass forward to Jimmy Medranda on the right wing. Medranda slipped a through pass ahead for Morris, who chipped the ball over an onrushing Yarbrough from about 10 yards out.

The Rapids contested the goal because Lodeiro took the free kick from about 15 yards behind where the foul was committed, but the play was reviewed and the goal was allowed to stand.

Frei made two saves, the most impressive when he leaped and got his fingertips on a shot by Lewis in the 82nd minute to tip the ball over the crossbar.