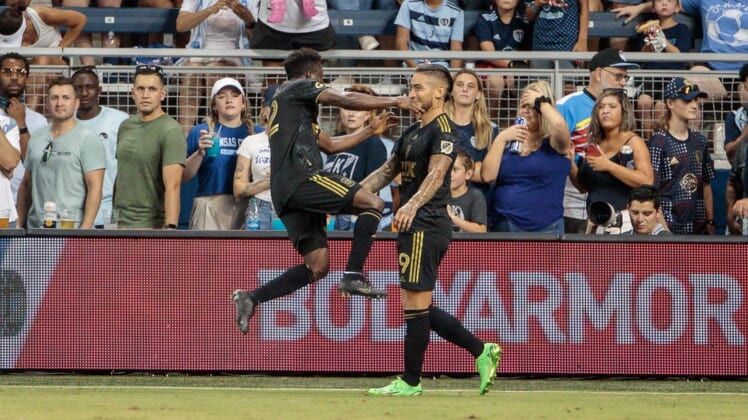 It’s been a highly successful first five months of the Major League Soccer season for Los Angeles FC, and the team hopes to keep rolling when it hosts the Seattle Sounders on Friday night.

LAFC have won three straight and lead the MLS in points and wins (14-4-3, 45 points). They rank second with 42 goals, paced by Cristian Arango’s team-best nine, followed by Carlos Vela and Jose Cifuentes with six apiece.

LAFC are 7-1-1 over their last nine matches and are on their fifth three-match winning streak since the start of last season.

Arango, who scored the first goal in his team’s 2-0 win at Sporting Kansas City last Saturday, has scored in 19 regular-season games since he made his MLS debut last August. That’s more than any other MLS player during that span, according to the league website.

And beyond that, international star Gareth Bale, fresh off his first MLS goal Saturday, is primed for more minutes on the pitch this week in what could be his home debut.

“He’s getting better,” LAFC coach Steve Cherundolo told reporters. “It’s a preseason (for him), so in preseason your body sometimes goes through bad days and good days, a little shock to the nervous system, some sore days, and we’re constantly improving him. We’re on track.”

Seattle (9-10-2, 29 points) is in ninth place in the West and just hasn’t been able to turn the corner and get on track this season. However, the Sounders have a history of being a much better team later in the season.

In five regular-season games at LAFC, the Sounders have lost four with one draw.

But there is some good news, with forward Raul Ruidiaz nearing a return from a hamstring injury. He’s been out almost three weeks and it’s not clear if he will play Friday.

“Is that an intriguing target, an intriguing timeline to get him? Yeah,” Sounders coach Brian Schmetzer said. “But I’m not so sure the risk to reward is enough, even though it’s national TV, all that, Supporters’ Shield leaders.”