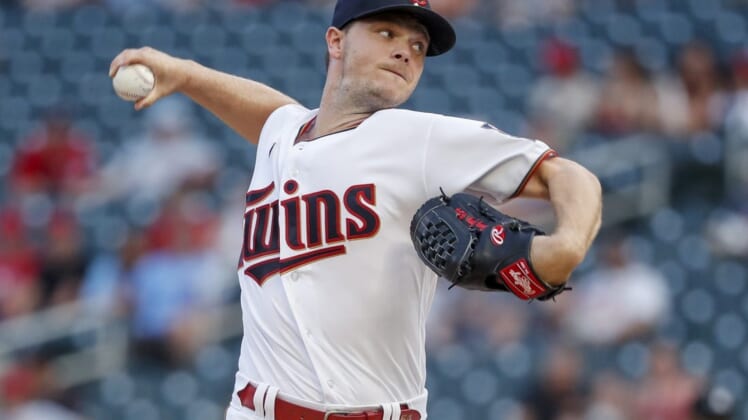 In his last outing on Tuesday night, Sonny Gray became the first Minnesota Twins starter to work into the seventh inning since July 1.

In his next start on Monday night, when Minnesota finishes a four-game wraparound weekend series with the Texas Rangers in Minneapolis, it needs Gray to pitch like that again in order to avoid another damaging loss to a sub-.500 team.

After dropping a 4-3, 10-inning decision Saturday night to Texas, the Twins managed just four hits off Kohei Arihara and Taylor Hearn Sunday in a 7-0 defeat. They also missed on a chance to gain ground on American League Central leader Cleveland, which was rained out of its Sunday game at home with the Chicago White Sox.

With the Guardians off Monday as they fly to San Diego to open a two-game series with the Padres Tuesday night, Minnesota can make up the half-game it lost on Sunday. And if history is any guide, Gray’s presence gives it a chance to do just that.

In 16 career games against the Rangers, 15 of them starts, Gray is 9-4 with a 3.18 ERA. That includes a pair of complete-game shutouts. Plus he is coming off a dominant outing in his 9-0 win over Kansas City, fanning 10 and giving up only three hits in six-plus innings.

Gray was grateful that manager Rocco Baldelli gave him the chance to start the seventh, even though he departed after consecutive singles.

Gray (7-3, 3.11 ERA) is also aiming to show Texas a better version of himself than it saw July 8 in Arlington, Texas, where he allowed five runs on four hits and two walks over 4 2/3 innings and didn’t record a strikeout in a loss.

The Rangers aren’t contending for anything besides third place in the AL West, but have played a better brand of baseball since firing manager Chris Woodward on Aug. 15. They are 4-3 under interim skipper Tony Beasley, including consecutive wins the last two games against a playoff contender.

“The reality of it is it was a surprise to me,” Beasley said of the battlefield promotion. “I was asked to be in charge and to embrace that. I believe we can. We can move the needle forward.”

One reason it’s going in the right direction is because Nathaniel Lowe has been hot at the plate. Sunday’s two-hit performance, which included his 18th homer of the year, has upped his average to a career-high .295. Lowe is 17-for-38 over the last 10 games and 7-for-14 against the Twins.

Rookie right-hander Cole Ragans (0-2, 5.02) will make his fourth career start — and first against the Twins — since joining the Rangers on Aug. 4.

Ragans is coming off a loss to Oakland Wednesday night, going five innings and allowing three runs off four hits and a walk with three strikeouts.