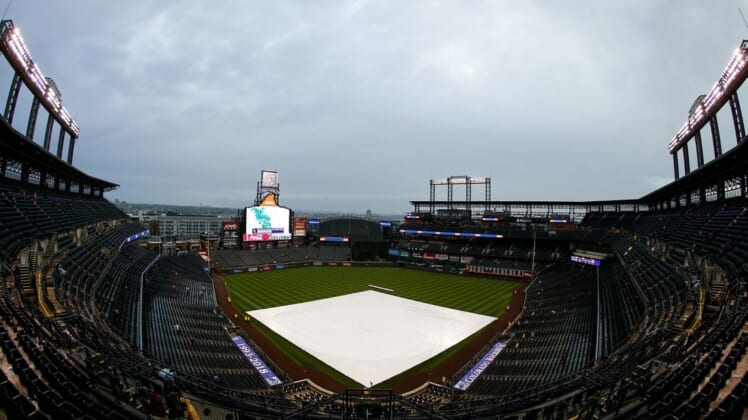 The New York Mets visiting the Colorado Rockies seems to prompt a not-so-great tradition — games postponed due to snow in Denver.

For the third time in 10 seasons, New York’s trip to Colorado has been hampered by wintry weather. Friday’s scheduled opener of a three-game series was postponed due to inclement weather, which turned into heavy snow.

The game is scheduled to be made up as part of a split doubleheader on Saturday. The first game is slated for a 1:10 p.m. MT first pitch. The second is ticketed for 6:40 p.m. MT, which could mean playing temperatures in the 30s.

After temperatures neared 90 degrees Thursday, a cold front moved into Colorado complete with rain and snow. The chilly forecast continues through Saturday with more precipitation likely and highs in the low 40s.

While Colorado’s rotation is fairly stable, the Mets are trying to fill holes after Max Scherzer was placed on the injured list on Thursday due to an oblique strain. He is expected to miss six to eight weeks and joins Jacob de Grom and Tylor Megill on the shelf.

Veteran Trevor Cahill could become an option in the future after New York signed him to a minor league deal on Friday.

The Mets are coming off a dramatic 7-6, 10-inning win over the St. Louis Cardinals on Thursday. Pete Alonso’s walk-off, two-run homer rallied New York and continued a run of success despite all the injuries.

Colorado will have a rare two-day break thanks to a day off Thursday and Friday’s postponement. The Rockies, who have lost eight of 10 games, could get a boost if outfielder Kris Bryant returns from the IL on Saturday as expected.

Bryant has not played for Colorado since April 25 due to a back strain.

The Rockies got a solid start from Kyle Freeland in a 5-3 win over the San Francisco Giants on Wednesday, and they hope Marquez can follow suit. He has lost three successive starts before beating the Kansas City Royals on May 14, when he threw six innings of three-run ball.

Marquez was an All-Star last year, but his ERA this season is nearly two runs higher than his 4.36 career mark. The Rockies need him to pitch like an ace if they are to have any chance in the ultra-competitive National League West, and he thinks he is up to the task.

“I still have the stuff to win a Cy Young,” Marquez said this week. “I have been working so hard to get back and be one of the top pitchers. I still can be. It’s been a little bit frustrating, but I’m going to be great the rest of the year.”

Marquez is 3-1 with a 3.48 ERA in five career starts against the Mets.

Carrasco opened May with consecutive wins but was hit hard in a no-decision against the Seattle Mariners on Sunday, when he yielded four runs on eight hits in 4 1/3 innings. He will be facing the Rockies for the first time.

Williams, who has alternated between the bullpen and the rotation this season, made a scoreless four-inning start against the Cardinals on Tuesday. He has a 2-1 record with a 4.58 ERA in three career starts vs. Colorado.

Gomber has pitched at least 5 1/3 innings in each of his past five outings, including a six-inning, three-run performance against the Royals on Sunday. He beat the Mets the only time he faced them, giving up two runs in eight innings on May 24, 2021.