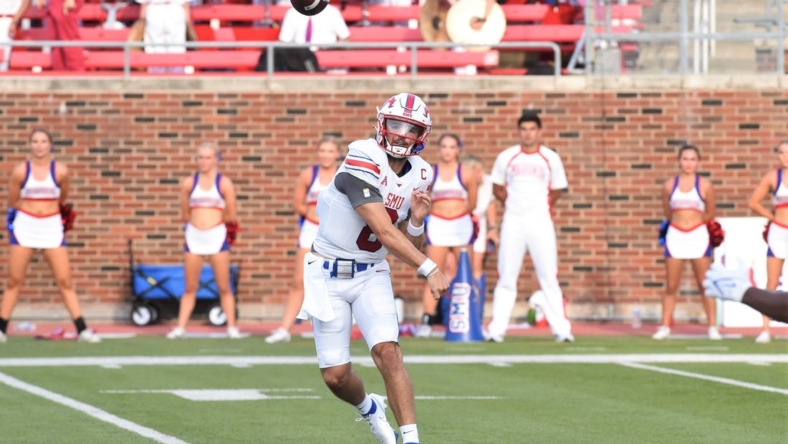 SMU, off a record-setting offensive performance, looks to guarantee a spot in the postseason when it travels to struggling South Florida on Saturday afternoon in an American Athletic Conference game in Tampa.

The Mustangs (5-4, 3-2 AAC) roll into Saturday’s game on the strength of an eye-popping 77-63 win at home over Houston on Nov. 5. SMU quarterback Tanner Mordecai racked up nine touchdown passes, including seven in the first half, along with 379 passing yards and a rushing TD in the victory.

Mordecai now has an SMU-record 13 games with 300 passing yards or more in his career. SMU has won two straight games and is still in the thick of the race for the conference championship game berth and a bowl game.

“I’ll say this about this team,” said Mordecai, who transferred from Oklahoma before the 2021 season. “I’ve been on different teams, different coaches, this team. But this team, no matter what, we play hard. One thing you can’t say is that we don’t lay it all out, so that’s what I’m really proud of.”

Five SMU receivers had at least one touchdown catch in the win, led by Ben Redding’s three scoring receptions. The Mustangs scored touchdowns on their first nine drives of the game.

The 140 combined points set the FBS single-season scoring record for two teams in regulation. The Mustangs established program records for points in a game, total touchdowns (11), passing touchdowns (nine) and 433 total yards in the first half.

USF (1-8, 0-5) is at the bottom of the league standings and heads home after a 54-28 loss at Temple on Nov. 5. Coach Jeff Scott was fired on Sunday a day after the Bulls dropped their seventh consecutive game. USF’s only win this season came against Howard, an FCS team, on Sept. 10.

“In the days ahead, I will share information about our search for a new head coach,” USF Athletic Director Michael Kelly said. “Our focus right now is on the talented young men in our football program.”