It seems only right that this year's World Series would be a meeting between the small-market Tampa Bay Rays and the big-spending Los Angeles Dodgers. 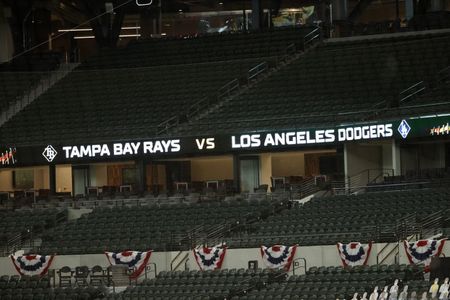 (Reuters) – In the oddest of Major League Baseball seasons shortened by COVID-19 and played in empty stadiums, it seems only right that this year’s World Series would be a meeting between the small-market Tampa Bay Rays and the big-spending Los Angeles Dodgers.

The matchup will be a welcome distraction from the second wave of the pandemic in the U.S. and presidential election talk when Game One of the best-of-seven series gets underway on Tuesday at the neutral venue of Globe Life Park in Arlington.

The Dodgers will not get their revenge on the sign-stealing Houston Astros – the Rays did that taking out the most hated team in baseball in the American League championship series.

But everyone loves a good David v Goliath story and in financial terms it does not get more rich v poor than the Rays and Dodgers.

While the Dodgers play in one of the crown jewels of ball parks, the Rays domed home is compared to a dingy warehouse with as much ambience as nuclear bomb shelter.

Back in the World Series for the third time in four years, the Dodgers are among the best baseball teams money can buy. Tampa, meanwhile, have long operated on a shoestring budget.

But despite the third lowest payroll ($28.2 million) among MLB’s 30 teams, the Rays posted the best regular season record (40-20) in the American League.

To get to the World Series for a second time the Rays swept the Toronto Blue Jays in the Wildcard Series, disposed of the New York Yankees in the American League division series then eliminated the Astros in seven games to win the AL pennant.

All three of those teams, according to Spotrac.com, work with far bigger budgets than the Rays, the Yankees topping the 2020 payroll list at $109 million and Astros fourth on $82.5m.

The Dodgers rank second with $107 million.

Los Angeles has a glittering high-priced lineup of future Hall of Famers, all-stars and most valuable players. They include ace Clayton Kershaw and outfielder Mookie Betts, who was acquired in a trade with the Boston Red Sox and earlier this year signed a 12-year contract extension worth a reported $365 million.

In contrast, the Rays are a collection of no name bargain basement pickups and shrewd draft picks.

“We don’t have too many household names that a ton of people are going to know,” conceded Rays outfielder Kevin Kiermaier. “We’re just a bunch of scrappy, hard-playing guys, and we show it on the field and we know how to win games.”

(Reporting by Steve Keating in Toronto; Editing by Christian Radnedge)