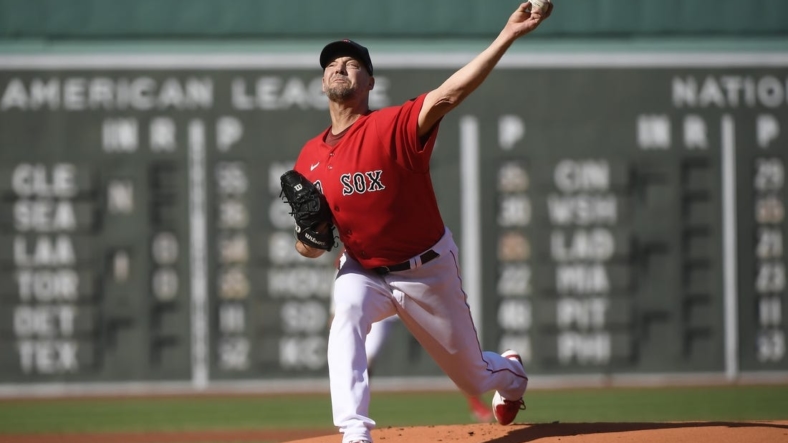 The final month of the season kicks off with the Boston Red Sox hosting the Texas Rangers in a four-game series beginning Thursday.

Both teams arrive in suboptimal form. The Red Sox have lost nine of the past 13 games, while the Rangers are riding a four-game losing streak.

Hill, 42, will look to follow up a dominant Saturday outing in which he struck out 11 and held the Tampa Bay Rays to three hits and one walk over seven shutout innings.

After Hill’s brilliant start ensured a series win, the Red Sox lost the finale in St. Petersburg, Fla., then dropped their first two games at Minneapolis against the Twins.

Boston finally recovered on Wednesday, collecting 13 hits — including a Xander Bogaerts grand slam — in a 6-5 win.

“We know what we’re capable of, especially when we’re going well,” Bogaerts said. “That’s without our best hitter (Rafael Devers). He’s not playing the way he wants right now, but you know that will turn around.”

Devers is in a 0-for-21 skid, but he went 6-for-14 with three doubles and a home run during a three-game set at Texas in May.

On Saturday, Hill became the first Red Sox pitcher to fan 11 or more batters at age 40 or older, a feat no major league pitcher had accomplished since Randy Johnson in 2008.

“It was a little boring, but it was fun to play behind him,” Boston center fielder Enrique Hernandez said.

Hill hasn’t had an ERA this high at the end of a season since 2013, but only Nick Pivetta has started more games for Boston this year than Hill’s 19.

“There’s certain days that it doesn’t look good. Yeah, he knows it, too,” Red Sox manager Alex Cora said. “But one thing for sure, he’s going to compete regardless of the result. He’s going to give you his best. I’m glad he’s with us.”

Texas will look to bounce back from getting swept in a two-game Lone Star State series, with the visiting Houston Astros claiming consecutive two-run wins.

During the Rangers’ 5-3 loss on Wednesday, Marcus Semien joined the 20-homer, 20-stolen base club for the first time in his career when he swiped second in the first inning.

“To be aggressive enough to get to 20 bags, it’s a big deal,” Rangers interim manager Tony Beasley said. “I’m happy that he feels confident enough to kind of let go and get some bags this year. He probably could have done that at some point in his career because he has that skill set.”

Semien has hit safely in nine of his past 10 games.

Otto earned a win over the Detroit Tigers on Friday, when he allowed four runs on five hits in five innings. The righty has completed five frames in eight consecutive starts, though he had been winless in nine straight before an Aug. 15 win against the Oakland A’s.

The two teams haven’t met since May 13-15, when Boston won two of three. Hill and Otto faced off in the middle game, an 11-3 Red Sox victory.

Hill gave up three runs (two earned) in six innings, improving to 3-0 with a 2.86 ERA in six career appearances (four starts) against the Rangers.