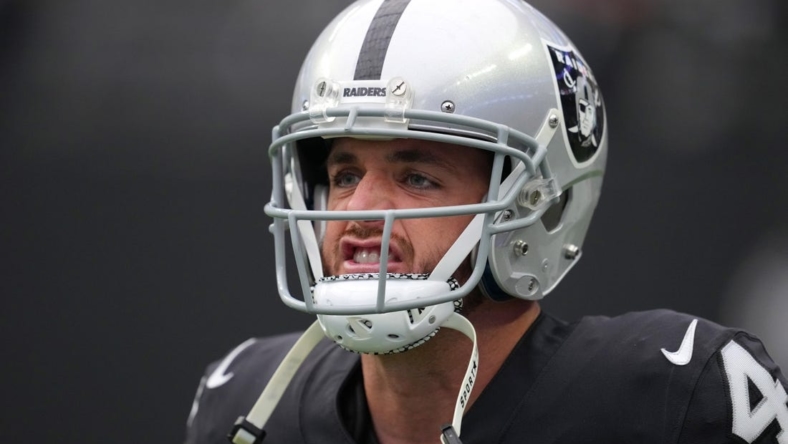 The Las Vegas Raiders might feel like they’re looking in a mirror when they visit the Jacksonville Jaguars on Sunday.

Both teams are hungry for a win and desperate for better play from their quarterbacks, who were considered the backbone of their teams heading into the season.

Vegas (2-5) has lost two of three and quarterback Derek Carr is coming off one of his worst performances in a 24-0 loss at the New Orleans Saints last Sunday. The ninth-year starter completed 15 of 26 passes for 101 yards and an interception.

The Jaguars (2-6) are stuck on a five-game losing skid and the adjusted quarterback rating for Trevor Lawrence has plummeted to 46 percent, which ranks 21st in the NFL.

The No. 1 overall pick in the 2021 NFL Draft has thrown 10 touchdowns but has been intercepted six times and has lost four fumbles.

He’s beginning to face sharp criticism, both nationally and in Jacksonville.

“If you want (the criticism) to go away, you start working on it, and you work on it to go away,” Jacksonville coach Doug Pederson said. “That’s something that I can help him with. I know the staff can help him with and try to put most of this behind him. Trevor does a nice job of sort of compartmentalizing things and keeping things on the back burner and just focusing on his job.”

The Jaguars acquired skilled wide receiver Calvin Ridley from the Atlanta Falcons on Tuesday, but Ridley is suspended through at least the 2022 season for betting on NFL games during the 2021 season.

Pederson said he’s not allowed to communicate with Ridley until he’s reinstated.

“We won’t know what we have until the league clears him,” Pederson said. “We understand that, but at the same time, we feel like we’re getting a really good football player and adding (him) to a good room, and great leaders in that room that will embrace him when he finally gets here.”

Wide receiver/kick returner Jamal Agnew (knee) was the only Jacksonville player on the Wednesday injury report. He was listed as limited.

Carr received a nod of approval from Raiders general manager Dave Ziegler when he met with reporters on Wednesday.

Ziegler said he’s been impressed with how fluidly Carr has adjusted to a new offensive system under first-year coach Josh McDaniels.

The Raiders lured wide receiver Davante Adams from the Green Bay Packers in the offseason, but he’s been mostly hot and cold with Las Vegas. Adams caught just one of five targets against the Saints for 3 yards.

Adams was limited during practice on Wednesday because of an illness as was tight end Darren Waller (hamstring). Wideout Mack Hollins (heel) was also limited. Starting linebacker Divine Deablo (back/wrist) did not participate.