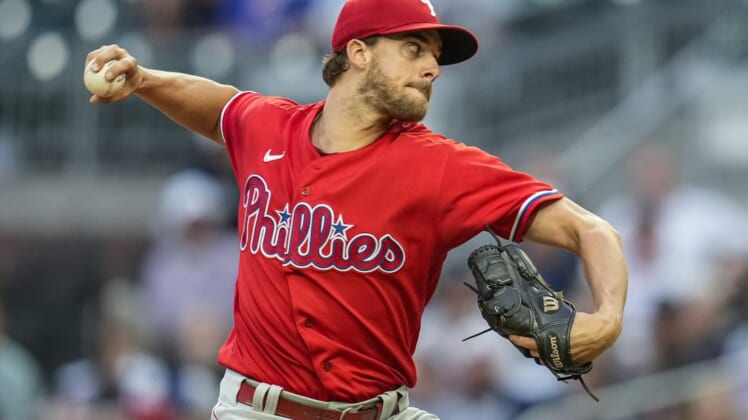 The Philadelphia Phillies went 10-18 in May, closing the month with five consecutive losses.

They’ll open their schedule in June hoping to salvage the finale of a three-game series when they host the San Francisco Giants on Wednesday evening.

The Phillies have lost three straight games in extra innings, including Tuesday’s 7-4 setback in 11 innings in which they finished 3-for-17 with runners in scoring position and 14 runners left on base.

“June has to be better,” Phillies manager Joe Girardi said. “The last two weeks have been really frustrating. We’ve had a lot of tough losses.”

The Phillies will hand the ball to righty Aaron Nola (2-4, 3.56 ERA) on Wednesday. In his last start against the Atlanta Braves, Nola was superb in going 8 1/3 innings and allowing five hits, one run and striking out 10.

“I always want to throw a complete game, right?” Nola said after the outing. “But I’m glad the more innings I can throw, the better. The win obviously is huge. It’s definitely more important.”

The Phillies received some bad news after the game when it was revealed that infielder Jean Segura suffered a fractured right index finger. Segura was hit by a pitch in the seventh inning and was replaced by Bryson Stott for the rest of the game.

How the Phillies will replace Segura in the near future is unclear.

The Giants will look for their fourth straight victory and a series sweep of the Phillies.

Gonzalez, who increased his average to .347, said the veterans on the team have helped him immensely.

“I feel great. They’re all just great dudes, easy to talk to, fun,” Gonzalez, 26, said in a postgame interview on NBC Sports Bay Area. “We get along. I’m just enjoying the ride.”

The Giants placed Darin Ruf on the bereavement list following the death of his father and recalled Heliot Ramos from Triple-A Sacramento.

Ruf’s return is unclear as players on the bereavement list can be out for as many as seven games.

“We’re going to give him whatever he needs to take care of his family matter,” Giants manager Gabe Kapler said. “When you lose a player like Darin, you need to have another right-handed bat. … As far as Ramos, we haven’t lost an ounce of conviction in his talent and his ability to make an impact at the major league level.”

Kapler added that Evan Longoria has right-shoulder soreness but could be available to pinch hit on Wednesday.

Left-hander Carlos Rodon (4-4, 3.60 ERA) is scheduled to start for the Giants. In Rodon’s last outing against the Cincinnati Reds, he gave up seven hits and three runs in 5 1/3 innings.

Rodon is 1-0 with a 0.00 ERA in one career start against the Phillies. That performance occurred in 2016 when he tossed 6 2/3 scoreless innings and allowed only three hits.