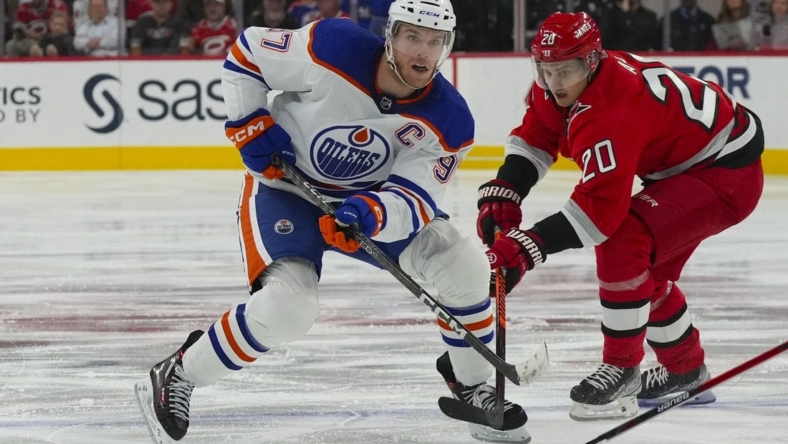 The Edmonton Oilers will try to bounce back again Saturday afternoon as they face the Florida Panthers at Sunrise, Fla., closing out a four-game Eastern Conference road trip.

Edmonton is having a disastrous start to November, losing four of six, including a 7-2 thrashing at the hands of the Carolina Hurricanes on Thursday. The loss in Carolina ballooned the Oilers’ goals against in November to 28 — 4.67 per game.

Goalie Jack Campbell, who joined the Oilers as a free agent over the summer, has just a .873 save percentage and 4.27 goals-against average in 10 games this season. Campbell has shouldered much of the blame for the Oilers’ slump following a 7-3 start that now has them looking for just their second win in six games.

“It was kind of like it’s gone all year for me personally,” Campbell said. “I just haven’t brought my best. Frankly, it’s just been pathetic.”

Campbell’s backup, Stuart Skinner, has been much better, posting a .928 save percentage with a 2.62 goals-against average in six games.

Things are much rosier in the defensive zone for the Panthers, who hosted those same Hurricanes earlier this week and won 3-0 on the strength of a 40-save shutout by goalie Spencer Knight.

Knight was perfect against Carolina, having a relatively easy time of it as Panthers defenders limited quality chances and forced shooters to the outside.

“Shutouts can be overrated. I’m just trying to find a way to win,” Knight said. “I have felt confident winning 5-4 and sometimes you win 3-0. It was a good team effort. The D did a great job, the forwards did a great job coming back. Everyone bought in.”

One thing that’s not overrated heading into this game is the play of Connor McDavid.

The Oilers captain, despite his team’s struggles, has been a dynamic force again this season. McDavid leads the NHL in points (31) and goals (15) and is third in the league with 16 assists. The NHL’s co-leader in assists happens to be teammate Leon Draisaitl.

McDavid is averaging a goal and two points per game, putting him on an early pace for a potentially historic season.

And this has been even more impressive — and important — since the Oilers lost Evander Kane for 3-4 months due to a deep cut in his wrist from a skate earlier this week.

The game picks up a bit spice, too, with Matthew Tkachuk returning to the Panthers from a two-game suspension. Tkachuk was a former Oilers nemesis with the Calgary Flames in the Battle of Alberta, before being traded to the Panthers this summer in a blockbuster for Jonathan Huberdeau.

Tkachuk watched Florida win both games during his suspension, but still returns as the Panthers leading scorer with 17 points (5 goals, 12 assists) in a dozen games.