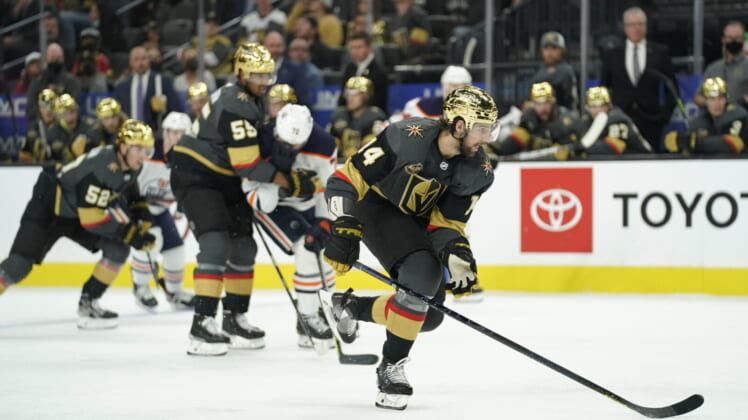 After a tough 5-3 loss against the Edmonton Oilers on Friday, the slumping Golden Knights (1-3-0) now have to play host to the New York Islanders (2-2-1). The Islanders made it all the way to the semi-finals last season where they lost to the eventual Stanley Cup champions: the Tampa Bay Lightning.

The Golden Knights have lost three games in a row since starting their season off with a victory against the Seattle Kraken. One of the biggest factors for their early-season struggles has been the large number of injuries they have been forced to deal with. Not only has there been a lot of players forced to miss time, the injuries are also affecting their core pieces.

The Golden Knights currently sit at the bottom of the Pacific Division and could really use the two points that are on the table tonight. Despite their slow start, the Golden Knights know that with time they will get their season back on track.

While the Islanders have had an up-and-down start to this season, they are one of the best teams in the league. They thrive at shutting other teams down and since the Golden Knights are missing their best offensive weapons, goals will likely be a rare commodity tonight.

Robin Lehner is expected to start for the Golden Knights against his former team. He played the 2018-19 season with the Islanders and started 46 games, finishing the season with a 25-13-5 record. Lehner has not had the best start to the season but he has been left out to dry by his skaters in a few of the games.

The Islanders have yet to announce a starting goalie for tonight’s game. Ilya Sorokin started their game yesterday and he recorded a shutout against the Arizona Coyotes. While it’s unlikely that he would play two days in a row, the Golden Knights must be prepared to face a hot goalie.

No matter who the Islanders start in net, they will for sure make it difficult for the Golden Knights to score. Their strong defense has been the backbone of their success throughout the past few years and they make life easy for their goaltenders.

Preseasons standout Daniil Miromanov is expected to be a part of the six defensemen that the Golden Knights dress tonight. He had a very impressive preseason and then scored four points in his first two games while playing for the Henderson Silver Knights in the AHL.

The hope is that he can provide an offensive spark from the blue line and help the Golden Knights score while they’re missing their best players. This is a better game to ease Miromanov into NHL life compared to Friday’s against Edmonton as he would have had to face Connor McDavid and Leon Draisaitl.

The puck drops tonight at 7 p.m. Pacific time as the Golden Knights look for their second win of the season.