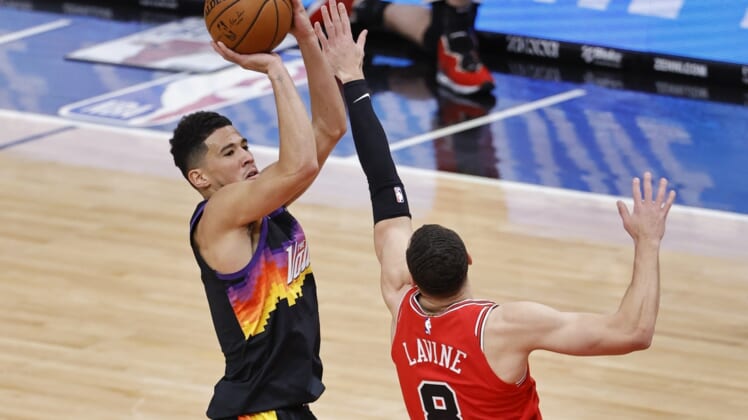 The Chicago Bulls have lost seven of their last nine games.

Ending the funk on Friday night could be a tough task as the Bulls visit the Phoenix Suns, who own an NBA-best 56-14 record.

The Bulls have dropped their last four meetings against Phoenix and also stand 0-2 on a three-game road trip that ends in the desert.

Chicago lost 112-103 to the woeful Sacramento Kings on Monday to start the excursion before falling 125-110 to the Utah Jazz on Wednesday.

The shaky play has seen the Bulls fall to fifth place in the Eastern Conference. They only have a two-game cushion over the seventh-place Toronto Raptors, who currently possess the top play-in spot.

“I don’t know if there’s a concern level,” Chicago reserve Alex Caruso told reporters. “But the sense of urgency has to be there. We can’t turn it on (13) games from now. I think we took a better step (against Utah) from where we were last game. We didn’t execute what we needed to, but I don’t think we’re far off.”

Zach LaVine continues to have issues with his left knee but scored 33 points and made five 3-pointers against Utah. LaVine is averaging 26.8 points in six appearances this month.

MVP candidate DeMar DeRozan tallied 25 points against the Jazz and is averaging 25.9 points this month.

But the production of the two stellar scorers isn’t equating to victories due to an inconsistent defense. Chicago has allowed more than 110 points in each of its last 12 losses.

“This is what we have to go through,” Bulls coach Billy Donovan said. “I’ve been around teams where you are getting to the point of the season we’re in and trying to play in these meaningful games and have really never been before and, ‘Oh, this is easy.’ It’s just not. We’re going to have to figure that part of it out.”

Phoenix isn’t finding things too difficult, even though it continues to play without Chris Paul. The All-Star point guard has missed the past 12 games with a fractured right thumb.

The Suns have adjusted to playing without Paul, winning seven of their past nine games.

Phoenix has averaged 133.3 points over the past three games while torching the Los Angeles Lakers, New Orleans Pelicans and Houston Rockets by an average of 20.7 points.

Star shooting guard Devin Booker poured in 36 points on 15-of-24 shooting in Wednesday’s 129-112 road win over the Rockets. He averaged 31 points during the three-game stretch.

“Just getting open shots,” Booker told reporters. “We have a lot of guys who are selfless that make plays for each other. You see what everybody did looking at the stat sheet. That’s hard for defenses. That wears teams down when everybody is a threat out there. You don’t know who to guard, so I get a free open look.”

Mikal Bridges added 26 points and Deandre Ayton recorded 23 points and 11 rebounds. A surprise 20-point scorer was Torrey Craig, who made all eight of his field-goal attempts while scoring 21 points and collecting a season-best 14 rebounds.

Craig made his first start since rejoining the Suns last month on a night in which Jae Crowder (groin) and Cameron Johnson (quadriceps) joined Paul on the sidelines. Johnson will likely miss his eighth straight game on Friday.

“I was just trying to keep it simple,” said Craig, who was part of the Phoenix team that reached the NBA Finals last season. “Just playing basketball, taking shots that were available, be aggressive when I could. It was nothing I did special to prepare for a game like this.”