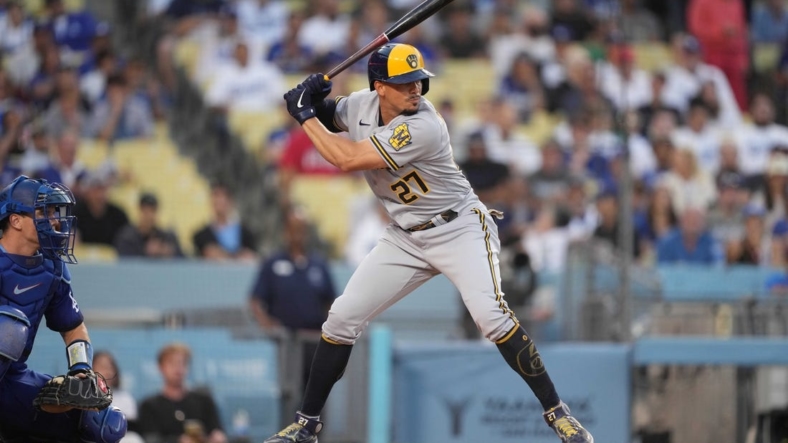 The Milwaukee Brewers find themselves slowly slipping out of contention in the National League Central.

The Brewers look to get back on track Friday night when they open a three-game series against the visiting Chicago Cubs.

Milwaukee has lost 14 of its past 22 games to plummet six games behind the NL Central-leading St. Louis Cardinals and 1 1/2 games behind the San Diego Padres for the third NL wild-card spot.

The Brewers dropped two of three games against Chicago last weekend to fall to 7-9 vs. their division rival this season.

Milwaukee rebounded with a shutout victory over the Los Angeles Dodgers in the series opener on Monday before getting outscored 22-7 over the final two contests of the set.

“We lost the last two games, it doesn’t necessarily matter who you’re playing,” Brewers manager Craig Counsell said following his team’s 12-6 setback on Wednesday. “We’re just looking for wins and trying to put wins on our ledger, but (have) been unable to do it.”

Milwaukee shortstop Willy Adames added, “They took advantage of every mistake we gave them and they scored a lot of runs, but that’s not going to make us put our heads down and just give up.”

Adames belted a solo homer in the first inning and added a two-run double in the seventh on Wednesday. He is 8-for-22 (.364) with two homers, seven RBIs and four runs over his past six games.

The Brewers return to Milwaukee on Friday to open a six-game homestand against the Cubs and Pittsburgh Pirates.

Right-hander Freddy Peralta (4-3, 4.08 ERA) sports a 5-1 record with a 3.56 ERA in 13 career appearances (eight starts) against Chicago. He has had a pair of no-decisions against the Cubs this season, including a two-run, four-hit result over six innings in Chicago on Saturday.

Willson Contreras belted a two-run homer off Peralta in that encounter. He also had an RBI single to cap a two-run rally in the 11th inning to pace the Cubs to a 6-5 victory over Milwaukee.

Chicago, however, has dropped four of the six games that followed, including an 8-3 setback against St. Louis on Thursday.

Ian Happ collected three hits and two RBIs on Thursday. In the previous series vs. Milwaukee, he had a solo homer among his three hits and scored three times.

Left-hander Justin Steele (4-7, 3.25 ERA) will look to turn around the Cubs’ fortunes on Friday.

Steele, 27, recorded his fourth straight no-decision on Sunday against Milwaukee despite yielding just two hits — both singles — and one walk while striking out nine over six scoreless innings. He has a 0.79 ERA with 33 strikeouts over 22 2/3 innings in four starts this month.

“From where he’s come from early in the season, it just feels like you’re getting that performance every time he steps foot on the mound, all the way around,” Cubs manager David Ross said of Steele.

Steele is 1-2 with a 2.68 ERA in nine career appearances (seven starts) versus the Brewers, including 1-1 with a 2.10 ERA in five starts this season.