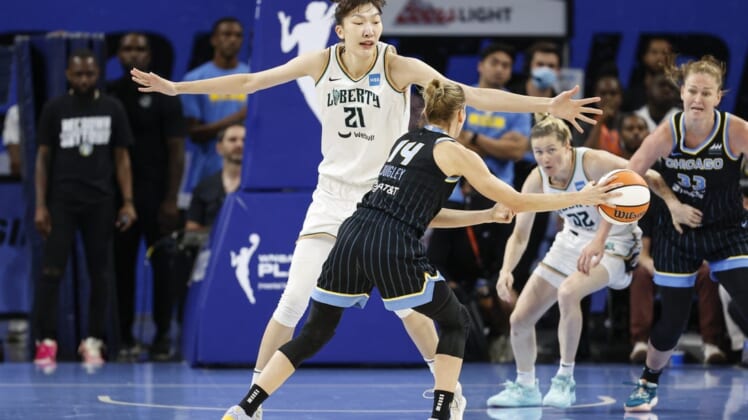 Kahleah Copper scored 10 of her 20 points during Chicago’s dominant first quarter, and the No. 2 seed Sky evened their best-of-three first-round series with a history-making 100-62 rout of the visiting seventh-seeded New York Liberty on Saturday.

Courtney Vandersloot had 16 points with nine rebounds, Azura Stevens scored 14 and Candace Parker posted 12 with 12 boards for the Sky, who led 31-10 after one quarter. They never let up, bouncing back from Wednesday’s 98-91 series-opening home defeat to force a decisive Game 3 on Tuesday in Brooklyn.

The Sky’s 38-point margin of victory is the biggest in WNBA playoff history.

After each scored 22 points on Wednesday, Natasha Howard had just eight and Sabrina Ionescu was held to seven for the Liberty, who shot 33.3 percent and committed 19 turnovers, compared to 49.3 percent shooting and eight turnovers in Game 1. Han Xu and Michaela Onyenwere each scored 10 for New York, which still can win its first playoff series since 2015.

Copper, who reportedly hurt her ankle during practice on Friday, didn’t look hindered as she set the tempo by opening the game with a 3-pointer and making her first three shots. Chicago used an early 9-0 run, then later, thanks to four points each from Rebekah Gardner (11 points) and Stevens, scored the final 10 of the first quarter.

The Sky, who shot 51.3 percent for the game, went 12-of-24 from the field and recorded seven steals in the opening period. Meanwhile, New York went 4-of-15 from the floor, missed all six 3s and committed eight turnovers to trail 31-10 after the first 10 minutes.

Though the Liberty, who trailed by as many as 31 in the second quarter, closed the first half on 9-2 spurt, they still were outscored 21-18 for that period.

The Sky left no doubt by scoring 13 of the first 17 points of the third quarter for a 65-32 advantage. Vandersloot opened the half with a 3-pointer, and she recorded seven points in the third as Chicago continued to dominate.

Chicago finished with 28 assists and a 45-28 rebounding edge.