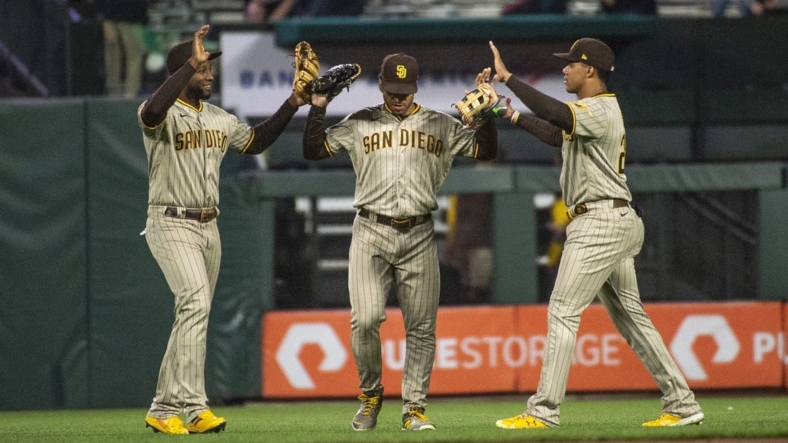 The San Diego Padres get a chance to move up the National League wild-card standings while the San Francisco Giants face the possibility of falling into fourth place in the NL West for the first time since May when the clubs conclude their three-game series on Wednesday.

With the host Giants needing a three-game sweep to move within 4 1/2 games of the Padres in pursuit of the final NL wild-card spot, the visitors instead have pulled out a pair of one-run decisions — 6-5 and 4-3 — to extend their advantage to 9 1/2 games on the eve of September.

The Giants have lost six in a row overall.

In the process, the Padres have moved within a half-game of the Philadelphia Phillies in their duel for the No. 2 wild-card position. San Diego has won four of its past five games.

While running their season record to 10-5 against the Giants, the Padres have put it all together in San Francisco. San Diego has been led by the starting pitching of Mike Clevinger and Blake Snell, the hitting of Josh Bell, Brandon Drury, Austin Nola, Jurickson Profar, Manny Machado and Trent Grisham, and last but not least, the closing of Nick Martinez.

Clevinger and Snell have combined for 11 innings of nine-hit, two-run ball, all of which could have gone for naught if not for the heroic efforts of Martinez. The right-handed reliever not only recorded a four-out save on Monday, but grabbed the ball again on Tuesday when struggling Josh Hader was unavailable on Wednesday.

Martinez was a bit shaky, serving up Joc Pederson’s two-run homer in the ninth, but he had just enough to seal a second straight one-run victory. He now has eight saves on the season.

“He’s got a lot of energy and confidence doing the role right now,” Padres manager Bob Melvin said of Martinez, who had never saved a game in his five-year major league career until June 22 of this season. “He’s done a great job with it.”

The Padres are hoping right-hander Joe Musgrove (8-6, 2.96 ERA) can pick up where Clevinger and Snell left off. He has started three wins against the Giants this season, going seven innings in each, allowing a total of just one run and 11 hits with 14 strikeouts and seven walks.

The 29-year-old earned one win and two no-decisions to run his career mark against San Francisco to 3-3 with a 3.38 ERA in 10 starts.

Hoping to get better support from their defense, the Giants are scheduled to counter with Alex Wood (8-11, 5.00 ERA). The left-hander has gone 2-1 with a 3.05 ERA in four starts against the Padres this season, and he fanned 13 over 13 1/3 shutout innings during the two wins.

While dropping into a tie for third place with the Arizona Diamondbacks in the NL West, the Giants allowed three unearned runs on Tuesday. The defense committed four errors in the game, two charged to shortstop Brandon Crawford on rushed throws as he attempted to prevent infield hits.

While noting “that wasn’t one of our better defensive games,” San Francisco manager Gabe Kapler refused to place the blame on the injury-related absence of defensive-minded first baseman Brandon Belt. On Tuesday, Belt was replaced by Yermin Mercedes, who has been primarily a catcher and outfielder in his pro career.

“We’ve been struggling to score some runs. We have to score runs,” Kapler said of having the power-hitting Mercedes in the lineup. “We have a backup catcher on the roster that can play that role for us.”