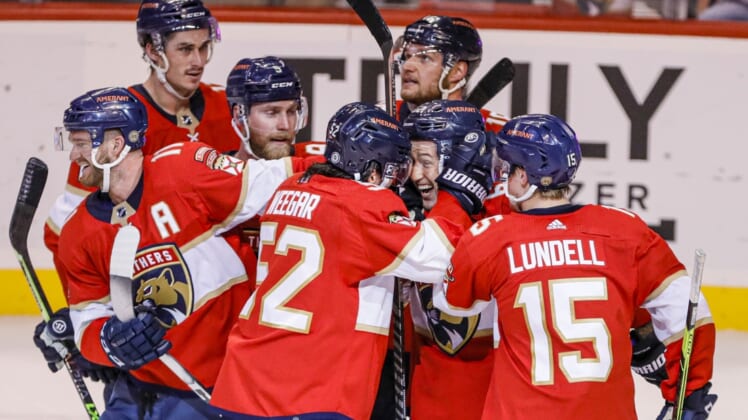 Florida suddenly is the hottest state on ice.

The Panthers set a franchise record Saturday with their 13th consecutive win, a 3-2 overtime victory vs. the Toronto Maple Leafs.

Tampa Bay cruised to a 6-2 win over the Nashville Predators on Saturday.

Both the Panthers and Lightning already have clinched playoff berths. The Lightning are the two-time reigning Stanley Cup champions, and the Panthers are atop the NHL standings this season.

No other state has two NHL playoff teams this season (sorry California, New York and Pennsylvania).

The Panthers are the league’s highest-scoring team. The Lightning reside in the top-eight in goals scored and goals allowed.

Florida has won two of its three matchups with Tampa Bay this season. Only one of those games was in Sunrise, and the Panthers rolled to a 9-3 rout in that game on Dec. 30.

Both teams are deep.

“Balanced scoring — it’s pivotal if you want to go anywhere in the playoffs,” Tampa Bay coach Jon Cooper said. “You need to have more than a couple of guys scoring. It’s a big reason for our success.”

The Panthers have seven 20-goal scorers, led by captain Aleksander Barkov (39). The others are Anthony Duclair (31), Jonathan Huberdeau (30), Sam Reinhart (29), Sam Bennett (27), Carter Verhaeghe (22) and Claude Giroux (21). Giroux, however, scored 18 of those while playing with the Philadelphia Flyers.

Huberdeau, who has 114 points, is trying to catch Edmonton Oilers captain Connor McDavid (116) for the NHL scoring lead. Huberdeau already leads the NHL with 84 assists.

Huberdeau said he doesn’t monitor the scoring battle, but …

“My brother texts me all the time,” Huberdeau said. “He says, ‘McDavid got another one.’

Panthers goalie Sergei Bobrovsky, who got the win on Saturday, leads the NHL in wins with 39.

Tampa Bay star goaltender Andrei Vasilevskiy, who had the night off on Saturday, is 36-18-5 this season with a 2.46 goals-against average and a .917 save percentage.

The Lightning also have Brian Elliott, who won on Saturday to improve his record to 11-3-3.

“I love our (goalie) tandem,” Cooper said. “But if we’re not defending (well), it doesn’t matter who’s in net. The (goalies) can only do so much.

“If we’re going to do anything (in the playoffs), we have to look after our own end.”

Panthers interim coach Andrew Brunette said his team got a taste of what the postseason will be like in Saturday’s win over Toronto.

“It felt like a playoff game,” Brunette said. “It was a tight-checking game. It was fast-paced. Toronto played harder than we did. But the fact that we won speaks to the grit and resilience of our group.”