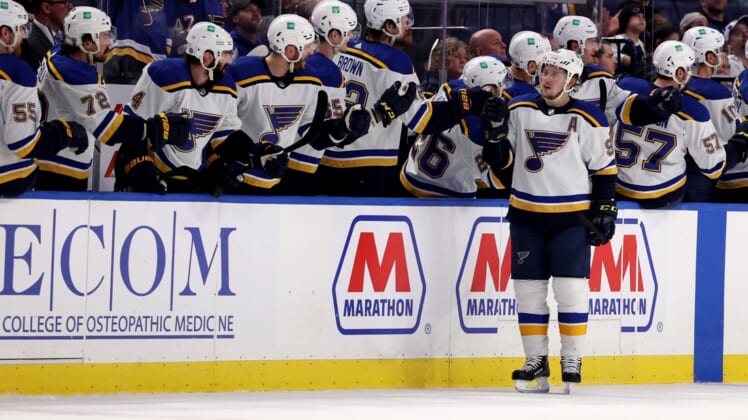 The battle for second place in the Central Division will escalate Saturday afternoon when the St. Louis Blues host the Minnesota Wild in a matchup of two of the hottest teams in the NHL.

Minnesota holds an edge entering the game, having played one fewer game, but the Blues have earned seven more regulation wins, so if the teams wind up tied at the end of the season St. Louis would win the tiebreak nod.

The Blues carry a 10-game point streak (9-0-1) into the home game. That run includes a 4-3 overtime victory over the Wild at home on April 8.

St. Louis also beat the Wild 6-4 in the Winter Classic at Minneapolis on Jan. 1.

But the Wild’s late-season roll extends back to mid-March. Minnesota is 12-1-2 in its last 15 games. Since losing the overtime game in St. Louis, the Wild defeated Los Angeles, Edmonton and Dallas.

“They’re big games, just like tonight, they’re playoff games and especially those teams, there are none of them that just show up to play a fun game,” Wild forward Fredrick Gaudreau said Thursday after the 3-2 overtime victory over the Stars. “Everybody is going for the two points. It’s just to play in our identity and when we do that, good things can happen.”

The Blues have been on an offensive tear, with four or more goals in 10 consecutive games.

The forward line of Robert Thomas centering Vladimir Tarasenko and Pavel Buchnevich has led the way. Thomas has an 11-game point streak with six goals and 17 assists in that span.

“It’s pretty cool,” said Thomas. “I think the most important thing is getting the team in shape for the playoffs. They’re coming right around the corner and every win means so much, especially home ice on the line. That’s the main thing.”

Tarasenko has eight goals and five assists in his last six games (with a hat trick Thursday in the 6-2 win in Buffalo) and Buchnevich has five goals and nine assists during his eight-game point streak.

Tarasenko has scored 31 goals this season after he battled shoulder injuries the previous two seasons, when he played just 34 games and scored just seven goals.

“He’s playing out of his mind,” Thomas said. “But we all know Vladi can play like that. We’ve just got to keep going, and we’re going to have to rely on him a lot.”

“He doesn’t cheat or hasn’t cheated the game the last two,” Evason said. “When Kevin gets a little excited to go on offense, that’s when he starts cheating a little bit. I think he’s recognized that.

“Obviously we’ve talked to him a lot, but more importantly he’s understanding how and when to go and that he’s taking care of business and not just trying to score goals, because this time of year you can’t do that.

“You can’t do that or it ends up in our net and he’s done a good job of recognizing that.”