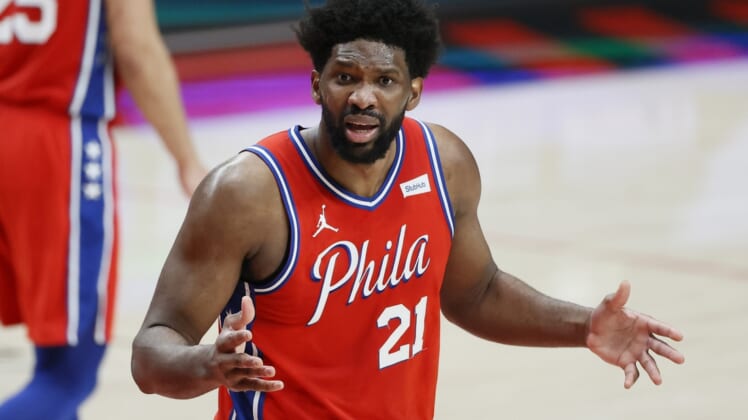 The Philadelphia 76ers’ grueling four-game road trip continues against one of the most improved teams in the league when they battle the Phoenix Suns on Saturday.

After alternating with a win at Sacramento and a loss at Portland, the Sixers will try and rebound against the high-octane Suns.

The Sixers fell 118-114 to the Trail Blazers on Thursday.

Joel Embiid led the way with 35 points and nine rebounds while Ben Simmons added 23 points, 11 rebounds and nine assists. Without key reserve Shake Milton (ankle), the Sixers lacked some of their usual depth.

Milton’s status is unclear for the game against the Suns. If that’s the case, expect rookie Tyrese Maxey to receive more minutes. Maxey has provided a spark off the bench at times this season.

“I feel like we’re winning and I’m doing whatever it takes to help my team by cheering them on and help them get better in practice,” Maxey said. “If that’s my role, then that’s what I’m going to take on and help my team through it.”

Tobias Harris has helped the Sixers immensely. After a subpar season in 2019-20, Harris has responded by playing at an All-Star level. It’s possible that Harris could earn his first career All-Star berth. Harris had 17 points, six rebounds and five assists against Portland.

“He’s capable of a lot offensively,” Simmons said of Harris. “He’s come a long way defensively also, but he knows what he’s capable of especially in those (late game) moments. He’s been great and trying to get him into his spots and get a little bit of rhythm going.”

The surging Suns will be searching for their fifth win in a row.

Their most recent game was a stunning 125-124 victory over the Milwaukee Bucks last Wednesday. Devin Booker scored 30 points, Chris Paul added 28 and DeAndre Ayton had 17.

What makes the Suns so dangerous is this: Both Booker and Paul are capable of leading the team on any given night. Defenses can’t simply focus on just one player.

“It’s tough for other teams. You don’t know what to take away,” Paul said. “Most teams have one primary defender, so who you gonna put him on — me or Book? We’re learning to play off of each other.”

The Suns have been a work in progress in recent years. Adding the likes of Paul and Mikal Bridges have turned them into legitimate playoff contenders.

“This isn’t the same team we’ve had in the past seasons — and no knock to the teams I’ve been on — but we have a lot more experience and guys that’s been there and expect to win,” Booker said. “So, it’s not an upset win against anybody we play against.”

It wasn’t that long ago when the Suns were drilled by 22 points on the road against the New Orleans Pelicans. They’ve come together since and have morphed into one of the best teams in the Western Conference.

“We have some warriors in here,” Booker said. “We have some guys who are ready to go to battle. … We obviously respect everybody in this league to a high level, but that makes people want to go at them even more.”