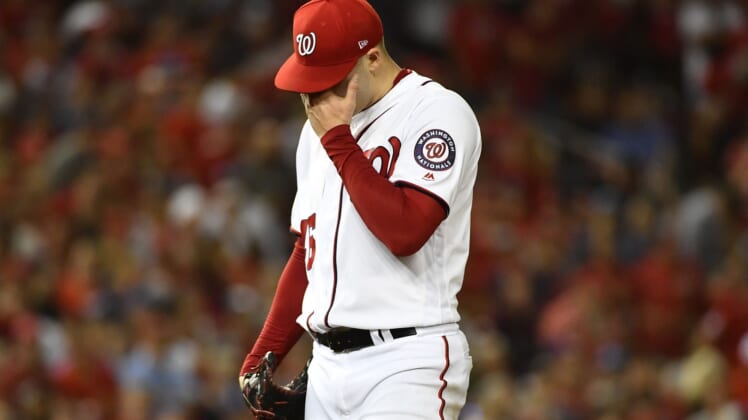 It began in St. Louis with Adam Wainwright and the Cardinals taking on the Atlanta Braves and rookie pitcher Mike Soroka. Wainwright carried St. Louis to a lead in the ninth. Unfortunately for the Cardinals, its bullpen failed and Adam Duvall came through in the clutch to propel the Braves to a 3-1 win.

The Los Angeles Dodgers turned to Hyun-Jin Ryu on Sunday to try and steal one on the road. Things looked bleak for the NL’s No. 1 seed until its bats woke up and ruined Washington’s piggyback rotation. While Washington’s bats tried to climb back in it, it wasn’t enough and the team now sits on the brink of elimination.

On a day of series-defining road wins by Atlanta and Los Angeles, here’s what we learned from Sunday’s MLB postseason action.

Adam Wainwright turns back the clock in October

The Cardinals brought Wainwright back in the offseason for stability in the rotation and his presence in the clubhouse. He rewarded them on Sunday by turning back the clock and pitching a gem in a critical game.

The 38-year-old faced one of the NL’s best lineups and rarely allowed it to experience positive momentum. Wainwright surrendered just three hits in his first seven scoreless innings before allowing two walks and a hit in the eighth. A phenomenal performance that deserved a win. Unfortunately, Carlos Martinez wasted it.

Atlanta’s heart of the order must wake up

Soroka did everything possible to keep his team in the game. He pitched under enormous pressure, with only one run allowed on a sacrifice fly, and dazzled for seven innings. Unfortunately, Atlanta’s top hitters aren’t showing up in this series.

All-Star Freddie Freeman got a great opportunity with the bases loaded in the eighth and immediately flew out to end the threat. He’s now hitting .182 in the postseason, which is only slightly better than Josh Donaldson’s .167 batting average and Nick Markakis’ .154 line. Fortunately for the Braves, Dansby Swanson and Adam Duvall are saving them in the clutch for the time being.

Cardinals have a problem at closer

Even after nearly blowing a 7-3 lead in Game 1, Carlos Martinez made it a point to call out Acuña’s celebration as disrespectful. It might be time for Martinez to start focusing more on rediscovering his fastball and not blowing saves.

St. Louis called upon its closer to shut the door in the ninth with a 1-0 lead. Instead, he allowed five base runners and three runs to score to gift Atlanta the win. Martinez now holds a 23.14 ERA this postseason and it might be time for the Cardinals to make a change in save situations.

Washington thought it found a loophole around its problem. In order to get around a worrisome bullpen, it would use its starting pitchers to cover the gaps. The plan worked in the wild-card game and even in Game 2 of the NLDS. So, manager Dave Martinez pulled Aníbal Sánchez after five brilliant innings and gave the ball to starting pitcher Patrick Corbin in the sixth inning.

It all came crashing down in minutes. Los Angeles, recognizing what it saw from Corbin on Thursday, turned his relief appearance into batting practice. Suddenly, Washington’s 2-1 lead became a six-run deficit. Teams can find a way to get around a weakness for a little while, but the dam eventually breaks and it wiped out all the energy and hopes for a win in Nationals Park.

Juan Soto is born for the postseason environment

While it will get lost in the aftermath of Washington’s pitching disaster, Soto keeps proving he lives for October’s bright lights. The 20-year-old drove in the hit that pushed the Nationals into the NLDS and gave them an early lead on Sunday.

Soto reached base three times in Game 3 and often provided a spark when few other Nationals’ players could. This is only the beginning for him and nights like this just further showcase what fans will enjoy for years to come.

Concern started to creep in for the fan base. After witnessing the Dodgers’ lineup strike out 17 times in Game 2, it could only rack up a lone home run in the first five innings on Sunday.

Everything suddenly clicked in the sixth. Russell Martin, who hit .220 this season, drilled a go-ahead, two-run double into the gap. It sparked a hot streak for the entire team as Los Angeles tacked on five more runs in the inning. The Dodgers kept piling on the hits and coasted to a victory with plenty of confidence going into Game 4.