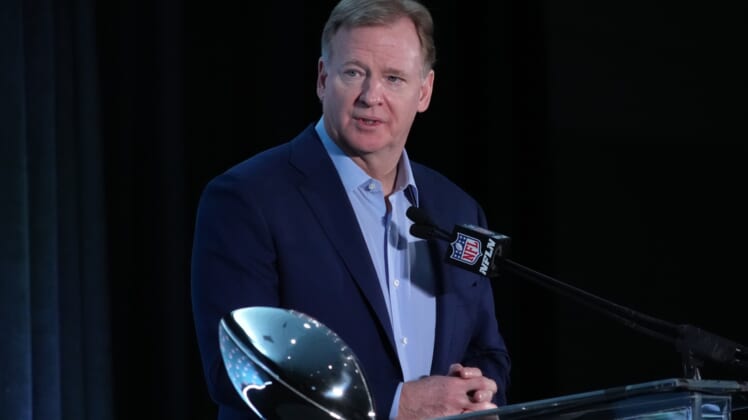 Six state attorneys general sent a letter to NFL commissioner Roger Goodell on Wednesday, outlining their “grave concerns” over “overtly hostile” workplace culture for women and warned the league to do better.

In a letter penned by New York State AG Letitia James and co-signed by five others, the AGs warned that the NFL could be subject to “the full weight of our authority to investigate and prosecute allegations of harassment, discrimination, or retaliation.”

The letter began by citing a February report in The New York Times in which 30 women spoke to the newspaper about treatment in the eight years since the Ray Rice scandal rocked the league.

“We all watched in horror in 2014 when the video of Ray Rice striking, knocking out, and spitting on his fiancé was made public,” the letter read. “In the aftermath, you promised to take gender violence seriously and improve the institutional culture for women at the N.F.L. These recent allegations suggest that you have not. Female employees reported that they were subjected to repeated viewings of the Rice video, with commentary by coworkers that the victim had brought the violence on herself.”

The Times reported cases of unwanted touching, parties where prostitutes had been hired and women being pushed out for complaining about discrimination.

“The N.F.L. must do better — pink jerseys are not a replacement for equal treatment and full inclusion of women in the workplace. Our offices will use the full weight of our authority to investigate and prosecute allegations of harassment, discrimination, or retaliation by employers throughout our states, including at the National Football League.”

NFL spokesman Brian McCarthy issued a response via email to the letter.

“We share the commitment of the attorneys general to ensuring that all of our workplaces — including the league office and 32 clubs — are diverse, inclusive and free from discrimination and harassment,” McCarthy wrote. “We have made great strides over the years in support of that commitment, but acknowledge that we, like many organizations, have more work to do.”