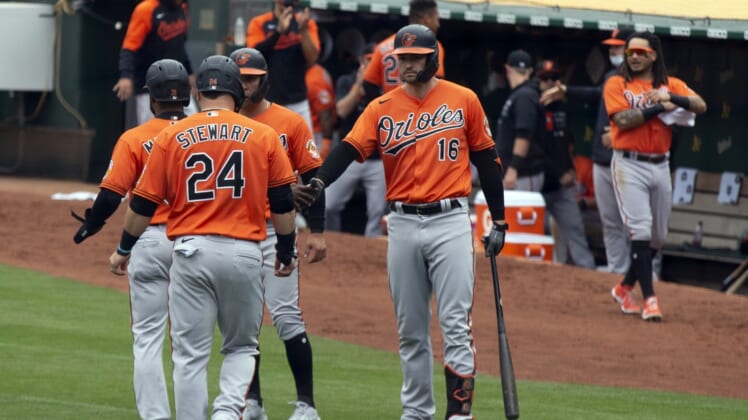 A solid performance by pitcher Matt Harvey and a big third inning at the plate lifted the Baltimore Orioles to an 8-4 win over the host Oakland Athletics on Saturday afternoon.

The Orioles have won three straight games and five of their last seven in clinching the three-game series against the Athletics. Oakland has lost four its last five.

Harvey (3-1) was dominant at times. He allowed two runs on four hits, with three hits and one strikeout in 5 2/3 innings.

The Orioles put their first three men on in the third inning against A’s starter Jesus Luzardo (1-3) on an error, a hit and a walk. Austin Hays drove in the first run of the game with a single, and the other two runners scored on a throwing error on the play.

Trey Mancini’s single brought in Hays to make it 4-0, and was followed by Maikel Franco’s single to left field. Ryan Mountcastle’s sacrifice fly made it 5-0 and allowed Franco to take third, from where he scored on Luzardo’s wild pitch.

DJ Stewart’s two-run home run made it 8-0 in the top of the sixth inning.

The Athletics got on the scoreboard with two runs in the sixth inning on an RBI double by Seth Brown and a single by Tony Kemp. Mark Canha (seventh inning) and Ramon Laureano (ninth) each hit their fourth homers of the season, both solo shots,

In three innings, Luzardo gave up five hits and six runs (three earned). Ge walked two and struck out one.

The teams conclude the three-game series on Sunday afternoon.