Six-run inning carries the Milwaukee Brewers past the Chicago Cubs 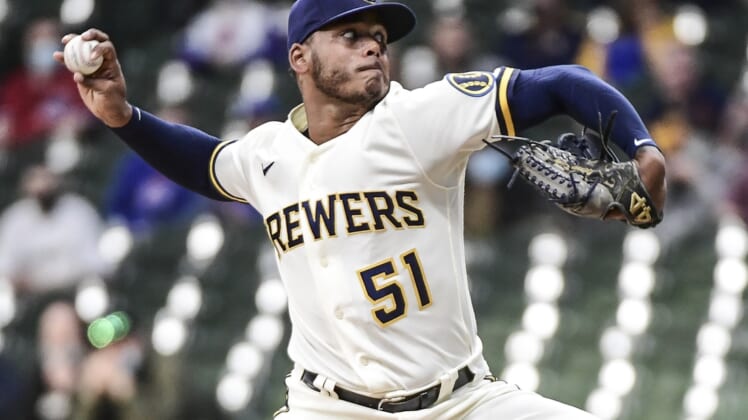 The Cubs have lost their past three games and five of the past six. The Brewers have won three in a row and five of six.

Milwaukee starter Freddy Peralta (2-0) struck out 10 in six innings, allowing on run on two hits and two walks. Josh Hader, the last of four Brewers relievers, got the final two outs to record his first save of the season.

In the fourth inning, Chicago’s Kris Bryant broke a scoreless game by leading off with a solo home run to left-center field.

The Cubs maintained the 1-0 lead until in the sixth.

Chicago starter Adbert Alzolay was cruising along, having allowed just one hit in the first five innings, before the Brewers got going.

Omar Narvaez led off the sixth with a single. Daniel Robertson walked, and pinch hitter Billy McKinney singled to load the bases with no outs. McKinney ended the night 3-for-3.

Alzolay got Lorenzo Cain to ground out with the force at home plate, but Cubs manager David Ross replaced the right-hander with lefty Andrew Chafin. Alzolay left with a 1-0 lead, but the bases remained loaded.

On Chafin’s first pitch, Urias drove a breaking ball down the left field line, scoring Robertson, McKinney and Cain to give Milwaukee its first lead of the night.

After a groundout and an intentional walk, Urias scored on a wild pitch. Jackie Bradley Jr. tripled home another run to make it 5-1, and Bradley scored on a single by Keston Hiura.

After Narvaez was hit by a pitch, Justin Steele, making his major league debut after being called up before the game, struck out Robertson to end the inning.

Chicago made it interesting in the ninth, getting a two-run double from Javier Baez off Drew Rasmussen. Hader then entered and got Jason Heyward to ground out before David Bote struck out to end the game.

Alzolay (0-2) wound up charged with three runs on three hits and a walk in 5 1/3 innings. He fanned six.