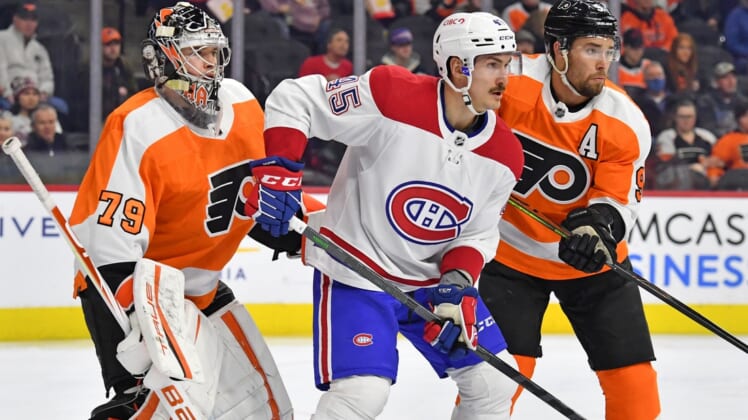 The Philadelphia Flyers and Canadiens both take six-game losing skids into Thursday’s game in Montreal.

There are only five games left in a lost season for Philadelphia that has also included separate losing streaks of 13 and 10 games.

“There were a lot of positives in the game for me tonight,” Flyers interim coach Mike Yeo said. “Again, I think we made some mistakes. I think at different times, our execution wasn’t sharp enough. Credit to a good hockey team. They play a good game over there. But I thought we did a lot of good things.

“The effort was there from the goalie on out. We just have to find a way to keep getting better every game here,” Yeo added.

That’s not the only reason they’re losing games.

Like many of their other defeats, the Flyers committed costly turnovers in their own zone. Despite Yeo’s optimism, they didn’t appear to be crisp with the puck when attacking the net and simply failed to execute too often.

“There should be motivation. It’s the NHL,” Philadelphia forward Kevin Hayes said. “We get paid millions to show up and perform at our job. If you can’t find motivation, you shouldn’t be on the ice.”

Despite a 2-0 loss to the Minnesota Wild on Tuesday, coach Martin St. Louis said he was pleased with the team’s effort.

“It would be easy to pack it in, but we haven’t done that,” St. Louis said. “I’m looking at our last nine periods (and) against the Islanders, we were very good from start to finish. Against Washington, we had a really good half game and tonight, minus the first five or six minutes, we were really good. The boys have bought into what we’re doing and the young guys understand how important these reps are for them.”

In a matchup against reeling franchises, the Canadiens will continue to compete as they look to retool for next season.

“Collectively, we’re managing their spirits pretty good because nobody likes losing,” St. Louis said. “We’re going to fight to the end and we’re going to keep building for next year.”

Paul Byron was injured in the shutout loss. The upper-body injury occurred in the first period and he didn’t return from the locker room at the end.

Byron had been bothered by some nagging injuries throughout the season and it’s unclear if he’ll be available to face the Flyers.

“He fights every day to play,” St. Louis said of Byron. “He wants to be with the team. He’s a competitive player and it’s hard not to be able to count on him 100 percent.”