The Cleveland Cavaliers and Golden State Warriors will tip off for Game 1 of the NBA Finals in Oakland on Thursday evening. It’s the long awaited third consecutive championship round matchup between these two teams.

With a week in between the conference championship round and the Finals, we’ve had a ton of time to look at the biggest keys and some of the top stories heading into the Finals.

1. Cavaliers will steal Game 1 in Oakland 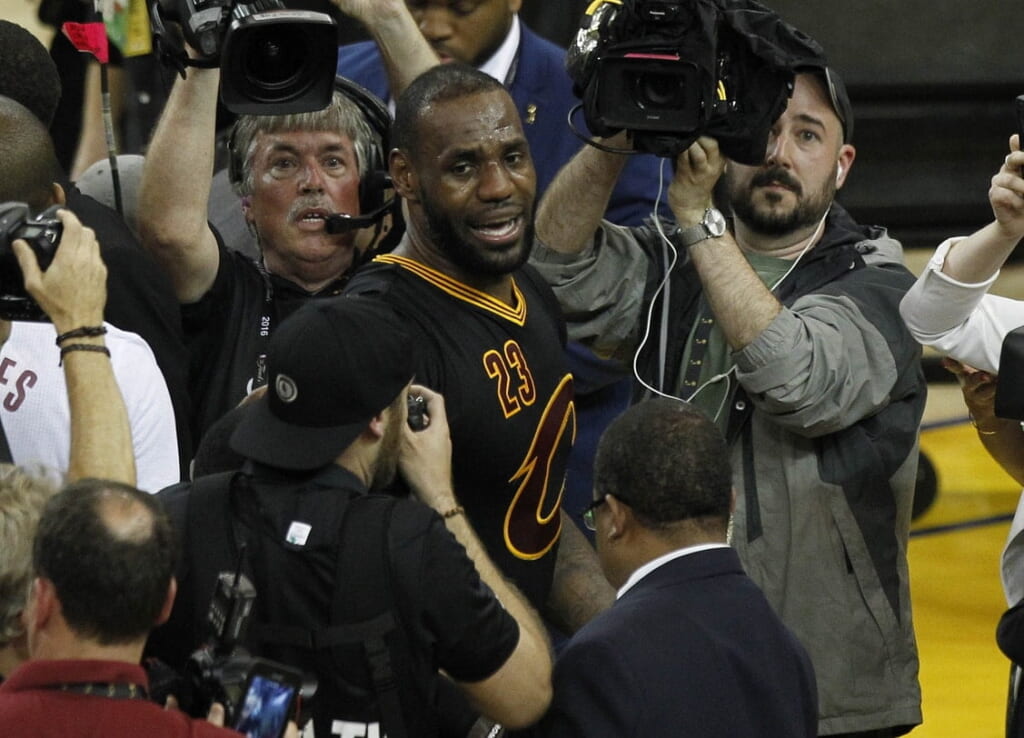 Before we draw too many conclusions here, remember just how poorly the Warriors came out in Game 1 of the Western Conference Finals against the San Antonio Spurs. Here’s a team that found itself down 20-plus points at home in the third quarter before Kawhi Leonard departed with an ankle injury that cost him the remainder of the series.

For the Warriors, it’s all about finding a balance between too much rest and working on basics in practice during a long layoff. It didn’t seem to bother the three-time defending Western Conference champs after a week-plus layoff between the first round and the conference semifinals against Utah. However, it did come rearing its ugly head in Game 1 of the conference finals.

All-Star forward Draymond Green has previously indicated that there’s no in between for this team. Following a long layoff, the Warriors either play tremendous basketball or stink up the joint.

While Cleveland will also have a week off between its win over Boston in the Eastern Conference Finals, it’s something LeBron James and Co. have handled better than the Warriors. It’s in this that we are projecting the Cavaliers to hand Golden State its first loss of the playoffs. It will come in Game 1 on Thursday night and will lead to many instant reactions. Though, a win here wouldn’t necessarily put Cleveland in the driver’s season (more on that below).

2. Tristan Thompson will be an x-factor

Thompson has been absolutely stellar for Cleveland in the playoffs. Heading into the Finals, he’s averaging 9.2 points and 9.3 rebounds per game. That includes a 60 percent mark from the field and an average of 4.2 offensive boards per game. He also provides a difficult matchup for Golden State when the Cavaliers go to their normal five-man starting lineup. Simply put, Zaza Pachulia does not have the athleticism to go up against him in the low post.

When Golden State puts Draymond Green on Thompson, the team is yielding two inches and nearly a dozen pounds. Considering Green’s elite-level play on the glass, that isn’t a big deal. However, this scenario would then pit a less-than-stellar perimeter defender against Kevin Love (more on that below).

With the Warriors not yet knowing if Steve Kerr will coach in the series, how Mike Brown utilizes matchups when he’s calling the shots will be big here. There’s a chance Thompson’s presence is minimize Pachulia’s impact in the series with JaVale McGee and his plus-level athleticism taking on Thompson.

More than anything, the presence of Thompson may force the Warriors away from their dominating small-ball lineup. This includes Green at the five, Kevin Durant at power forward and former NBA Finals MVP Andre Iguodala at small forward. That could take Golden State out of its comfort zone throughout the series.

Let’s not even talk about Thompson’s four-plus offensive boards per game. Given Cleveland’s scoring prowess, handing the team four more possessions could be a major x-factor in what promises to be a close series.

3. Kevin Love’s impact will be minimal 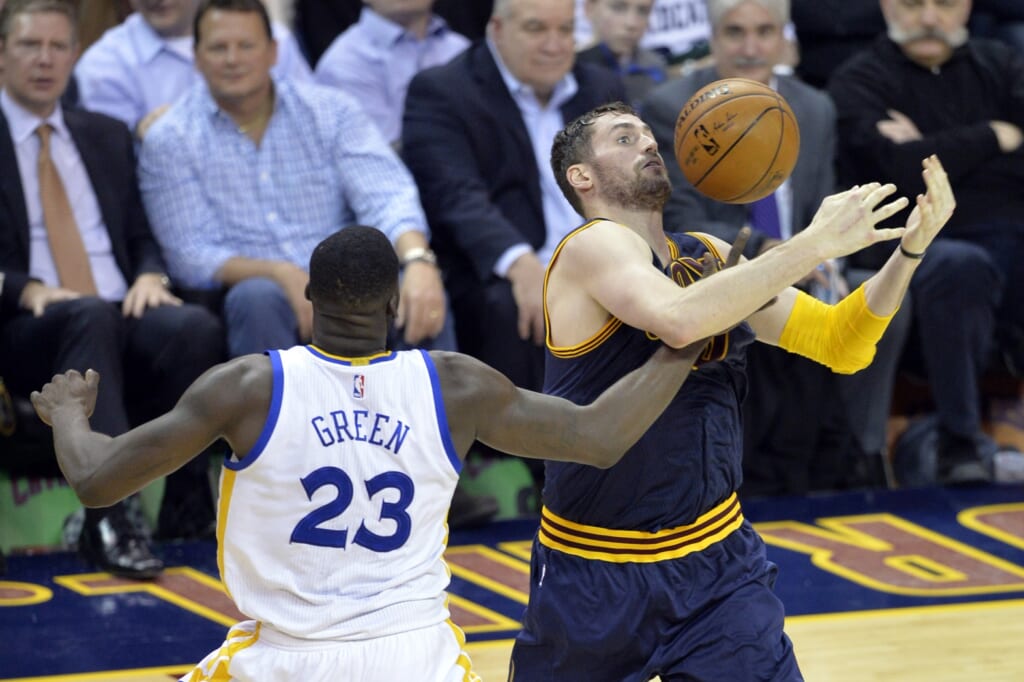 The Warriors can definitely scheme to prevent Love from making a huge impact in this series. While Love himself is averaging 17.2 points and shooting 48 percent from three in the playoffs, the Warriors present him with a difficult matchup. In two regular season games against Golden State, Love averaged just 11.5 points and 4.5 rebounds while shooting at a 32 percent mark from the field.

Draymond Green. There’s nowhere else we have to look but there. Green’s ability to bang on the inside while displaying elite-level defense on the perimeter has been a detriment to Love’s ability to make an impact against the Warriors.

Surely Cleveland can attempt to switch its lineup in order to prevent this specific matchup. And with the presence of LeBron James, one might conclude the Warriors will throw Green in his direction under these circumstances. That’s until we realize Kevin Durant will likely take on that task. And after Durant himself put up the best defensive season of his career, the Warriors should have confidence there.

We’re not projecting Cleveland to pretty much take Love out of the rotation like it did in last year’s Finals. But the odds are stacked against the All-Star making the same impact against Golden State that he did heading into the championship round.

For a rookie second-round pick that was pretty much bought from Milwaukee, McCaw has been absolutely amazing for the Warriors. McCaw played primarily during blowouts in the regular season. And with the Warriors, there were a lot of those. In this, he averaged just 4.0 points while shooting 43 percent from the field.

But when asked to play a more substantial role in the playoffs, McCaw has stepped up. He put up 18 points on 6-of-8 shooting with Andre Iguodala sidelined in Game 2 of the Western Conference Finals. The UNLV product also scored 11 points in a Game 3 win over Portland in the first round.

McCaw has tremendous range out on the perimeter and has not been afraid to take it to the lane. He’s not gun-shy at all, which could come in handy in the Finals.

Should Iguodala or Shaun Livingston struggle off the bench, we would not be surprised to see the Warriors put McCaw in to see what he can provide. Considering he has fresh legs and is about as quick as any guard in this series, that could present a matchup problem for Cleveland. This is only magnified if the likes of J.R. Smith or Iman Shumpert is tasked with guarding him.

5. None of the big four will win series MVP 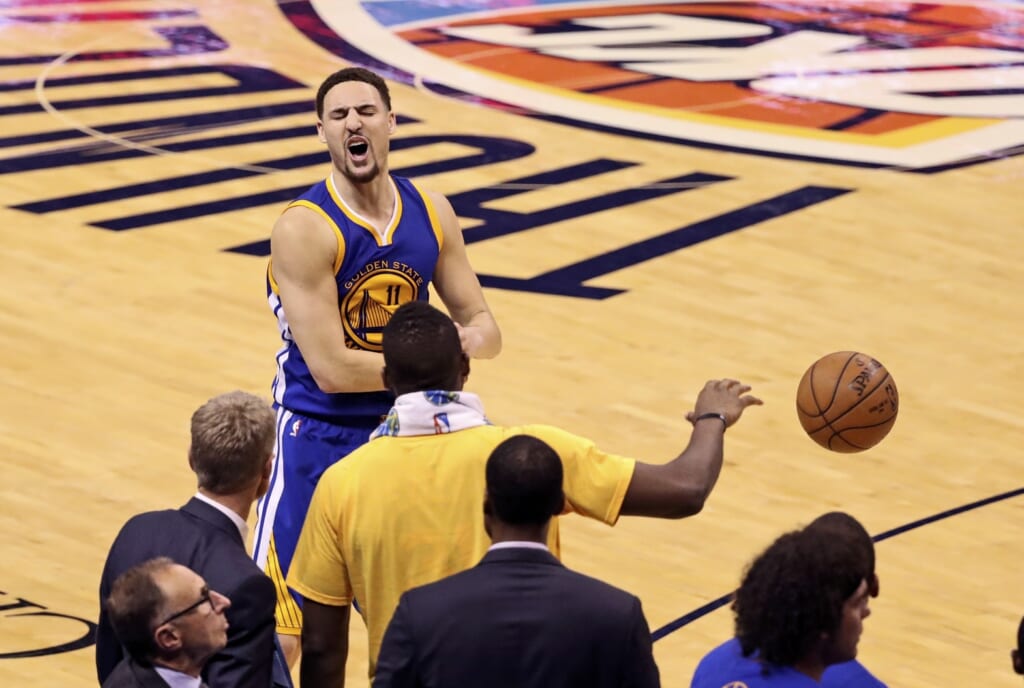 Stephen Curry against Kyrie Irving. Kevin Durant against LeBron James. These are the two individual matchups we will pay close attention to once the Finals kick off. That’s all fine and dandy. It makes for a story leading up to the championship round. Though, the ability of other members of the Cavaliers and Warriors to step up is what has led to this third consecutive Finals matchup between the two teams.

Back in June of 2015, it was all about Andre Iguodala and his ability to go up against James that enabled the Warriors to hold off Cleveland. Ultimately, Iggy would go on to win the Finals MVP after holding James to 40 percent shooting in the series. While the combination of James and Irving would help the Cavaliers exact revenge last June, their supporting cast has stepped up en route to this year’s Finals.

It’s in this what we’re projecting none of the big four will be named the series MVP when all is said and done.

For the Warriors, it could be either Draymond Green or Klay Thompson. In Cleveland, the likes of Tristan Thompson and Kevin Love have both stepped up. We want to focus on the stars. The best players in the game. Those who can lay claim to being the best in the world. But it’s these role players that will almost certainly impact this series in a huge way.

Heck, let’s take it one step further before moving on to the nuts and bolts of this story. All hail, Klay. We’re going to go way out on a limb and project that Thompson earns the NBA Finals MVP this year. Sure the lesser known of the two Splash Brothers has struggled thus far in the playoffs. But when hot, he’s the most-dominant scoring option on the team. Here’s a dude that once dropped 37 points in a quarter. During the regular season, Thompson also poured in an absurd 60 points in 29 minutes against the Indiana Pacers.

For Thompson, it’s also about mismatches here. Can we really expect J.R. Smith to put pressure on Thompson out at the wing? That doesn’t seem to be terribly realistic. And when Cleveland goes with Kyle Korver at the two, Thompson can easily drive by him to the lane. If there’s one player on the Warriors who has a tremendous advantage in individual matchups, it surely is Thompson. Look for him to take advantage of this in a big way en route to earning the Finals most prestigious award.

Sure we predict Cleveland will win Game 1 in Oakland. In no way does that mean the Warriors are dead in the water. Here’s a team that boasts a 13-game winning streak heading into the Finals. Its lost a total of one game with its big four playing since February 4th. Overall, the Warriors are 27-1 in their past 28 games. One loss, even in the opener won’t doom this team. That’s only magnified by the fact that the Warriors have posted a 93-30 record on the road during the Steve Kerr era.

This just goes to show us how dominating the Warriors have been away from Oracle Arena. Take the Western Conference Playoffs as a case study here. Golden State is 6-0 away from Oakland with an average margin of victory of nearly 16 points in the playoffs. Meanwhile, Cleveland’s average margin of victory at home in the postseason stands at 8.3 points.

It would not be an absolute shock to see Golden State lose Game 1 and then turn on the jets to make relatively quick work of Cleveland in five or six games. There’s a reason this team has been absolutely dominating in recent months. One total loss since March 11th is a prime example of this. Look for Golden State to take home its second championship in three seasons even after dropping Game 1 at home. That will likely come in five or six games.