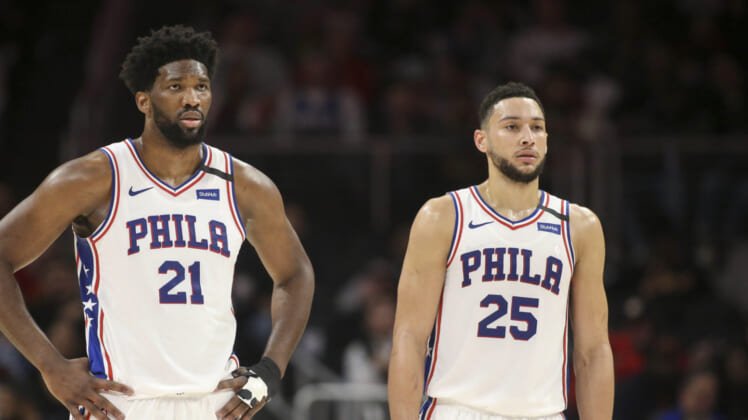 The NBA season is quickly winding down. Outside of the Milwaukee Bucks and Los Angeles Lakers dominating, it’s been a pretty ho-hum season around the Association.

Meanwhile, the Kyrie Irving experiment in Brooklyn has already proven to be an unmitigated disaster.

These are among the six biggest failures from the NBA season thus far.

I fully understand that Green is frustrated. His Warriors currently boast the worst record in the NBA at 13-48 and have been without Stephen Curry since the first week or so of the season. With fellow All-Star Klay Thompson sidelined all season, these Warriors are simply a shell of their former selves.

Even then, Green has not lived up to expectations. He’s continually getting run from games, a fact that makes me believe Green’s heart is not into the game this season. All said, the former All-Star is averaging 8.0 points, 6.2 rebounds and 6.2 assists on 39% shooting from the field. Just gross.

Even when Joel Embiid and Ben Simmons were on the court together prior to both stars suffering injuries, these Sixers were not living up to expectations. It’s led to speculation that general manager Elton Brand could decide to move on from head coach Brett Brown before the season ends.

Philly currently boasts a 37-24 record and is just a half game up on the Indiana Pacers for the fifth seed in the Eastern Conference. More troubling is the fact that the Sixers are a laughable 9-22 on the road. At this point, a season that started with championship aspirations will culminate in an early playoff exit. Nothing we’ve seen from the Sixers this season dispels that notion.

Sacramento thought it was getting a great young head coach in Walton last summer after he was fired by the Los Angeles Lakers. Boasting a talented young roster, the recipe for success seemed to be there in California’s capital city.

In no way has that come to fruition. Walton has been an absolute disaster on the bench. He has not gotten a long well with players, Buddy Hield included. It’s led to a horrible 26-34 mark on the season. As of right now, I’d actually be surprised if Walton lasted more than one season in Sacramento. That’s how bad he’s been.

Injuries on top of injuries. Drama on top of drama. You name it. Nothing has gone right for Irving in his first season with the Nets. Now out for the remainder of the campaign with a shoulder injury, Irving is very close to hitting bust status.

The interesting dynamic here is that Brooklyn did not necessarily play better in the 20 games Irving suited up in. The team was 8-12 in those outings and is currently 18-21 with him sidelined. Could this lead to the Nets finding a way to get out from under Irving’s contract during the summer? Stranger things have happened.

Though he does seem to be in over his head in that role, the issues in Minneapolis extend much further than young head coach Ryan Saunders. We’re talking about an awkwardly built roster behind star big man Karl-Anthony Towns.

Minnesota changed course during February’s trade deadline, dealing Andrew Wiggins and draft picks to the Golden State Warriors for D’Angelo Russell. With Towns sidelined to injury, it’s led to a disastrous 17-41 record. Heck, the Wolves are 2-6 since trading for Russell. It’s going to be a major project to get this squad back to respectability. And I don’t think Saunders is the guy to do that.

It’s not that the Knicks boast an 18-42 record on the season. Rather, it’s all about this organization embarrassing itself at nearly every turn. Led by embattled owner James Dolan, that has included firing head coach David Fizdale and president Steve Mills.

On the court, these Knicks have very few building blocks moving forward. Former first-round picks Kevin Knox and Frank Ntilikina have been major busts. The only bright spots here are Mitchell Robinson and R.J. Barrett. Though, neither player is going to move the needle too much going forward. At the very least, these Knicks have the NBA Draft lottery to look forward to.