Single-season NFL records most likely to fall in 2021

With the schedule expanding to 17 games for the 2021 campaign, there are bound to be several single-season NFL records that will fall in 2021.

Let’s take a look at the all-time marks that are most likely to fall this season.

It’s a pass-happy league, and with an extra game in tow, any NFL records that revolve around QBs are in jeopardy going forward.

The Kansas City Chiefs overhauled their offensive line this offseason. They should have an upgraded unit overall, but it will take time for the big men in the trenches to jell.

Good thing the Chiefs have Patrick Mahomes at quarterback, with Travis Kelce and Tyreek Hill to throw to. Kelce is a walking reception at tight end, and Hill is the most electrifying wide receiver in football.

But let’s focus on the Mahomes side of this. He went from league MVP in 2018 to Super Bowl MVP the next year. He just lost the Big Game to Tom Brady and the Tampa Bay Buccaneers, and was running for his life the whole time while dealing with turf toe.

This is honestly the first time in Mahomes’ young career where he’s in a situation that could create a huge chip on his shoulder. He already has a 5,000-yard passing season on his resume, and should only continue improving as his already-advanced knowledge of the game continues to sharpen.

Mahomes has a legitimate chance to break the single-season passing record. He’s going to be out for revenge after putting up just nine points in Super Bowl LV. That’s a scary thought for the rest of the league.

When he forced a trade from the Minnesota Vikings, it seemed like Stefon Diggs might’ve been going to a worse situation with the Buffalo Bills. Instead, the trade ended up working out for both sides.

Justin Jefferson shined as a rookie wideout in Minnesota to the point where it looks like he might be setting many individual records. As for Diggs? He self-actualized as an NFL player at the same time Josh Allen happened to take the biggest Year 3 leap of any QB in NFL history.

The result for Diggs was leading the league in receptions (127) and yards (1,535). Now, he actually has a full offseason program to work with Allen and continuity in the Bills’ system.

All these elements combined suggest Diggs is only going to get better. Given how well he took advantage of his myriad targets in 2020, if anyone’s in position to eclipse Calvin Johnson’s single-season yardage standard, Diggs seems like the best bet.

Every season is different in the NFL, and the fact that the Buccaneers took so long to come together last season hints at the upside they have for 2021.

Tampa Bay also managed to retain all its key pieces from its Super Bowl LV run — every starter on offense and defense, to be exact — so it’s a little easier to project how they’ll fare this year because of that uncommon continuity.

The Bucs’ offensive line improved throughout 2020, and Brady got much more in sync with his loaded supporting cast. What this offense struggled to do was run the ball, as it had a 22% stuff rate, per Football Outsiders. Only the Philadelphia Eagles were worse in that category.

Bruce Arians love to risk it for the biscuit on downfield passes anyway, but Tampa Bay’s lack of short-yardage running success means Brady will be tasked with executing in the red zone more often than not.

That should lead to a plethora of short touchdown passes to inflate Brady’s numbers. Yes, even at age 44, he has a real shot to unseat Peyton Manning as the single-season leader in TD throws. That’s how loaded the Bucs are.

People might be sleeping on this one among the other flashier NFL records, but Miami Dolphins kicker Jason Sanders just netted himself a contract extension this offseason after a phenomenal effort in 2020.

Sanders was actually only eight field goal makes away from David Akers’ mark last season. Unless Dolphins quarterback Tua Tagovailoa really steps up as a sophomore — it’s not looking good in minicamp thus far — you can expect Miami’s offense to struggle putting the ball in the end zone. 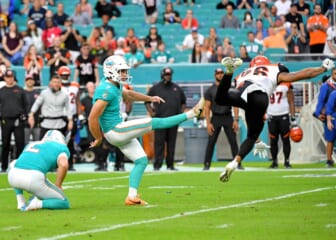 This isn’t all on Tagovailoa, either. The Fins did a fine job upgrading their receiving corps with Will Fuller and Jaylen Waddle, yet their youthful offensive line and thin backfield are largely unproven.

Did we mention Miami has not one but two new offensive coordinators in George Godsey and Eric Studesville? Another red flag.

Dolphins coach Brian Flores will have the team’s defense playing at an elite level, which means he’s more likely to be conservative when it comes to getting any points he can get. That’s especially so with such a reliable kicker in Sanders, who hit on 36 of 39 attempts a season ago.