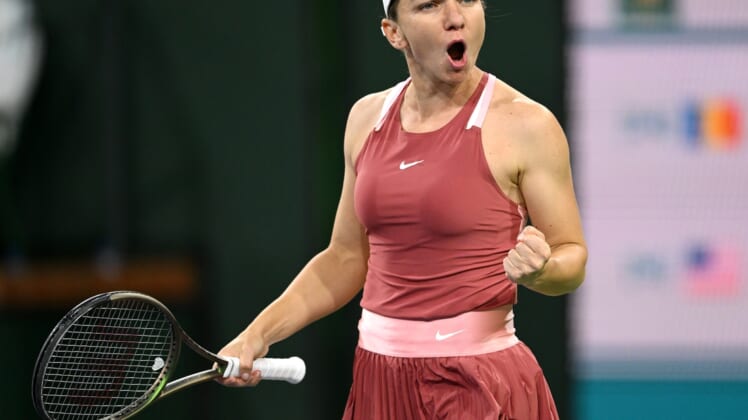 Halep didn’t commit a double fault while Gauff had four in the windy conditions. Halep is 2-0 against Gauff, also beating her at Wimbledon in 2019 in the round of 16.

“It’s not always easy to find your rhythm when the wind is strong,” Halep said in her postmatch interview. “On one side of the pitch, I had to apply a certain style, and on the other side (I had) to change. You have to stabilize.

Halep will face countrymate Sorana Cirstea in the round of 16. The 26th-seeded Cirstea defeated Russia’s Anna Kalinskaya 5-7, 6-1, 6-0 to advance.

Halep and Cirstea have met three times but haven’t faced each other since 2010. Cirstea has won two of the three meetings.

The 19-year-old Raducanu had a 5-4 lead in the third set before Martic fought to stay in the match and then easily won the final two games.

“It was a rollercoaster of emotions, obviously it was a really tough match,” Martic said afterwards. “I managed to turn it around, and I’m really happy with today’s win.”

Martic next faces 28th-seeded Russian Liudmila Samsonova, who was a 6-4, 7-6 (4) winner over Danka Kovinic of Montenegro.

Also advancing was third-seeded Iga Swiatek as the Pole recovered from dropping the opening set to post a 6-7 (3), 6-2, 6-1 victory over Denmark’s Clara Tauson.

“I think you have to put pressure on her too because she likes being aggressive as well and playing fast, and her hand is pretty strong,” Swiatek said after beating Tauson. “I feel like she was hitting full power sometimes when I didn’t put much pressure on her. So I needed to do that.”