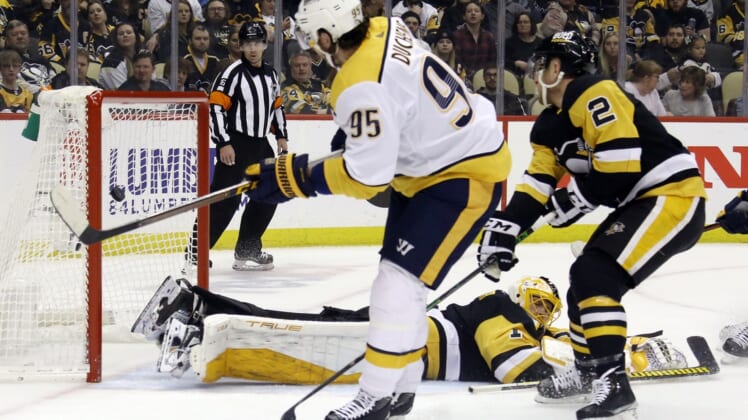 Sidney Crosby scored at 2:21 of overtime Sunday to notch his 1,400th career point as the Pittsburgh Penguins snapped a four-game losing streak with a 3-2 win over the visiting Nashville Predators.

Crosby, playing in his 1,100th game, tipped a feed from Rickard Rakell inside the left post. It was Crosby’s third point of the game, along with an earlier goal and an assist.

Matt Duchene and Nick Cousins scored for the Predators (41-26-5, 87 points), who have lost two straight.

Nashville goaltender David Rittich made 27 saves. Predators No. 1 goaltender Juuse Saros did not dress for the game because of a non-COVID-19 illness.

Crosby opened the scoring at 4:58 of the first. Off a feed from Rakell, he beat Rittich far side from the left circle.

At 18:49 of the first, Duchene tied it. He took a pinpoint stretch pass from Mikael Granlund near the right point and got a breakaway when defenseman Marcus Pettersson fell. Ducehene beat DeSmith blocker side.

The Penguins were outshot in the first 11-3, with just one shot after Crosby’s goal.

Borowiecki, who got a slashing penalty, did not return for the third.

The Predators didn’t score on the resulting power play to start the third, but Cousins made it 2-1 at 4:31. He intercepted a clearing attempt by Matheson and, from the slot, rifled a shot past DeSmith.

Zucker tied it 2-2 at 8:53 on a backhander from the slot off a feed from Crosby.