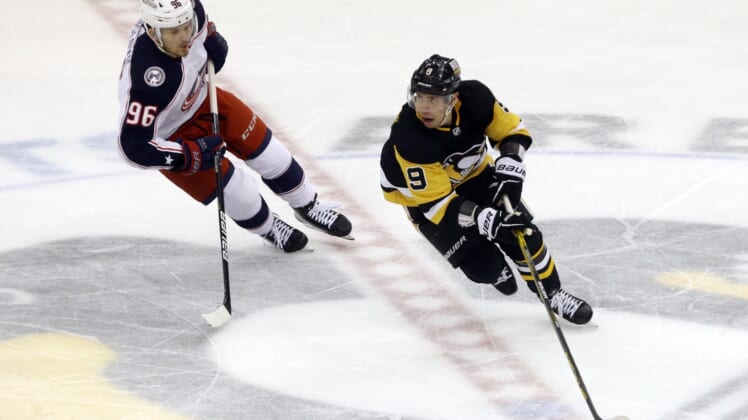 The goal was the first of two for Guentzel. Bryan Rust and Evgeni Malkin each added a goal and an assist, and Sidney Crosby had three assists for the Penguins, who have won five of their past six games.

Crosby’s first assist of the night was his 879th of his career. It pushed him past Nicklas Lidstrom for 22nd all-time in NHL history.

Pittsburgh goaltender Tristan Jarry, 7-1 in his past eight games, made 26 saves.

Gustav Nyquist scored for the Blue Jackets, who had won four of their last five.

Columbus picked up its only on a power play in the first period. Zach Werenski launched a shot from the right point. The puck squeaked past Jarry and was rolling toward the goal line. Nyquist made sure it went in by reaching behind the goalie and pushing it with a backhand motion at 8:37.

Zohorna tied it at 2:40 of the second. With Korpisalo sliding to his right to stop a shot by Chad Ruhwedel, Zohorna had an open net to hit when he got the rebound in front.

With his 30th goal, Guentzel increased the Pittsburgh lead to 2-1 at 3:16. Crosby had the puck to Korpisalo’s right and found Guentzel with a pass across the top of the crease. Guentzel also had a gaping net to hit.

Rust made it 3-1 at 7:28 of the second. He moved in from the left point, got around Columbus’ Cole Sillinger, moved in on Korpisalo, then switched up and pushed the puck in far side.

At 14:06 of the second, Crosby got off a shot from the bottom of the right circle that bounced off Guentzel’s glove and inside the far post for a 4-1 Penguins lead.

During a five-on-three power play, Malkin made it 5-1 at the 8:54 mark in the third period, snapping a shot to the far side from the right circle.