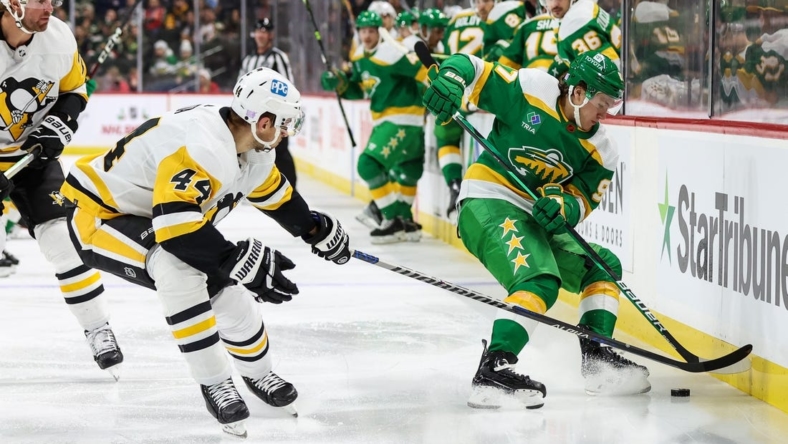 Sidney Crosby scored twice and posted one of his two assists on Kris Letang’s first goal of the season as the visiting Pittsburgh Penguins beat the Minnesota Wild 6-4 on Thursday night in Saint Paul, Minn.

Crosby opened the scoring in the first period and gave Pittsburgh a 4-2 lead 5:50 into the third.

Letang, who recorded at least 10 goals for the eighth time during his 17-year career in 2021-22, drove a pass from Crosby through traffic to break a 2-2 tie with 2:57 remaining in the second period during a five-on-three power play.

Joel Eriksson Ek’s second goal of the night, while short-handed, got the Wild within 3-2 with 8:37 remaining in regulation. However, Pittsburgh’s Brock McGinn scored from long distance with 5:27 to go and Jake Guentzel, who had two assists, notched an empty-netter for a 6-3 edge.

Brandon Duhaime and Matt Dumba also scored for Minnesota, which has dropped three straight during a 2-4-1 stretch. With Wild star and ex-Penguin Marc-Andre Fleury out due to an upper-body injury, Filip Gustavsson stopped 25 shots.

Crosby scored 8:15 into the game when he drove the puck past two Minnesota defenders and over Gustavsson’s shoulder. It marked the 100th time during Crosby’s illustrious career that he scored the game’s first goal.

Pittsburgh made it 2-0 with 2:57 remaining in the opening period when its fourth line came through. Josh Archibald sent a pass into the slot for Teddy Blueger, who backhanded the puck for Minnesota native Poehling to convert.

Less than five minutes into the second period, the Wild tied the contest. At 4:31, Duhaime cut the deficit in half, and then 12 seconds later Eriksson, Ek chipped the puck over Jarry and in. Both Minnesota goals came due to Pittsburgh’s inability to clear its own zone.

The Penguins went 2-for-5 on the power play Thursday after going 2-for-22 in their previous eight games. The Wild came up empty on three opportunities with the man advantage.