Should we be concerned over the Los Angeles Lakers’ struggles in Orlando? 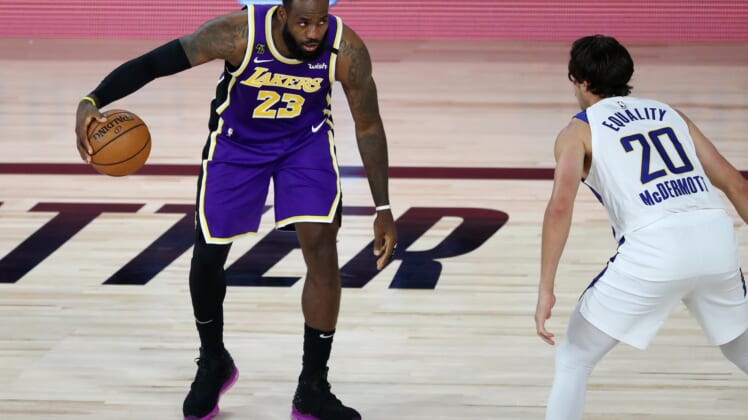 Prior to the 2019-20 NBA season being suspended back on March 11, the Los Angeles Lakers had lost a grand total of three games in a month and a half of action. LeBron James and Co. were rolling. They were seen as heavy favorites to come out of the Western Conference and earn a trip to the NBA Finals.

Nearly five months later, and things are in no way as clear. Los Angeles is coming off a brutal 116-111 loss to a lesser Indiana Pacers squad Saturday evening. It’s a game that saw All-Star big man Anthony Davis connect on just 3-of-14 shots while finishing minus-20 in 35 minutes of action.

This represents the Lakers’ fourth loss in six games since the NBA season resumed inside the Walt Disney World bubble in Orlando.

Should we be concerned?

Los Angeles has already wrapped up the No. 1 seed in the Western Conference Playoffs

Rotational issues for the Lakers

It’s all about the star power in Southern California

Through six games in the bubble, we have not seen both LeBron James and Anthony Davis cook within the confines of the same game. James returned from a one-game absence on Saturday to score 31 points on 13-of-24 shooting. As noted above, Davis shot 3-of-14 from the field and scored just eight points.

Needless to say, having both players perform at a high level in the same game makes Los Angeles nearly unbeatable. But given what we’ve seen at Walt Disney World, this could potentially be an issue once the playoffs start.

That will be magnified if Los Angeles is able to make a deep run in the playoffs, especially if the team goes up against the likes of the Los Angeles Clippers and Houston Rockets, both of whom have multiple stars to rely on.

It’s not yet time to panic in Los Angeles. It’s clear that head coach Frank Vogel and Co. have a plan. Ease into the playoffs while getting a better understanding of what the rotation might look like.

Even then, a 2-4 record in six games is nothing to write home about. The Lakers need to right this ship before the postseason starts. If not, a shocking early exit could be in the cards.